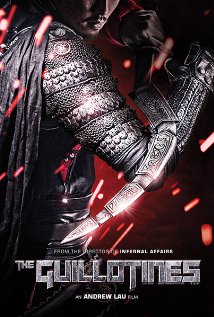 While Shaw Brothers films have yet to get full remake treatments (those are coming from what I've heard recently), there have been quite a few that have their concepts taken for modern films. One of those films happens to be "The Guillotines." Taking a few cues conceptually from "The Flying Guillotines" and "The Flying Guillotines II," this modern telling of the elite group of assassins comes off as quite the surprise. Particularly since I fully expected the film to be action oriented and focus on itself around that. It's not. In fact, it's far more of a morally embossed historical drama then anything else and despite some enjoyable moments, tends to be a missed opportunity overall.

When an uprising of common folk lead by the charismatic Wolf (Xiaoming Huang) threatens the Qing dynasty and their focus to unite China, the Emperor brings out his dynamic assassination team The Guillotines to handle the situation. With the help of his personal guard and the leader of the Guillotines Leng (Ethan Juan), their job is to capture Wolf at any cost necessary. But with a a master like Wolf and a government who wants to rewrite history, Leng and his Guillotines have to tread carefully or they might end up at the wrong end of the execution list...

How do you not go into "The Guillotines" without high expectations? With the director of "Infernal Affairs," a story about one of the coolest kung fu "legends" out there, and a relatively impressive up and coming cast...this should have been a shoe-in for one of the best films of the year. Unfortunately, despite all of the talent mentioned above there is one kink in the armor of this battle beast...the script. Far too often the structure of the film with its random flash blacks and leaps of time tend to leave the viewer in a tizzy trying to keep up - because the film flies at a wicked pace. Occasionally the film slips into pure cheesiness that feels awkward in comparison to some of its higher level concepts and dramatic beats. For example, I'm not even sure how their guillotine swords even work as if its some sort of magic magnet rod with a string (that's only seen once for the sake of the plot) that is done with some CGI that is hit or miss at best. It's this weird unbalanced blend that makes "The Guillotines" an underwhelming experience.

To be honest, there are great moments in this film though. Andrew Lau has a great eye for the dramatic and with the film's surprising focus on those moments, "The Guillotines" does pull off some great scenes. With some impressive acting to boot, the drama in the film can be potent. The scenes with Leng and Wolf together are palpable and Xiaoming Huang steals every moment in the film. In a odd twist, there is really only one full one action sequence in the film too and it's the opening sequence. From there the film focuses down on the dramatic and it does help the film a bit as it does carry a bit of heart with it. It can drag since there really isn't any other action in the film outside of a few tense thriller moments, but those strong moments help.

I know that my expectations of "The Guillotines" certainly hurt my overall experience with the film. I was expecting full on heads-a-rollin' action and what I got was moral based dramatic storytelling. Normally this isn't such a bad thing, but the film ultimately struggles with some poor structuring and awkward moments where Andrew Lau doesn't seem to feel completely comfortable with the material and getting it to flow. When the film hits its heights, it soars, but unfortunately those moments can't make up for the overall issues that it stumbles into.