I am back!!! It has been awhile my friends and I am sorry for the delay.

I have decided on my latest adventure to go back to the past, visiting a classic title that I have never had the chance to experience. So without further delay I bring you my review of "NINJA SCROLL!!!"

By now, I am probably one the few 30 something anime fans to have never seen this movie or the TV series for that matter. There is something about these older titles that really make my heart smile. Understanding that every generation will look back and say things like "they don't make em' like that anymore," I really think that with anime this truly is the case. "Ninja Scroll" is another example of this thought. While this film has been a staple in the genre for 20 years now , as a first time viewer I found it rather entertaining. It's a violent, bloody, hard hitting gore fest, mix in some female exploitation and you a have a 90's era anime title not suitable for children. 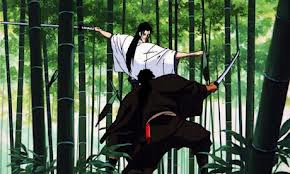 The story follows Jubei, the Lone Ranger of feudal Japan. Minus the sidekick, mask, and the back story. Who am I kidding, he is nothing like the Lone Ranger. Jubei is a sword for hire, unless of course he feels you have a noble cause after which he might help you for free. While out on a stroll one sunny day our hero comes across a big gross looking monster about to have his way with a young lady. After intervening and saving the woman's life Jubei is in thrown into a battle between Japanese government, a criminal overlord, the 8 Demons, and the locals. So the adventure and bloodshed begins.

While I feel that this film is for adults only I can't help but think about the 90's and my own childhood. I was 16 when this movie came out and I would have loved it then. I can see my teenage self sitting around a TV with my buddies in anticipation of what was about to unfold. I had those same feelings as I was sitting down to watch "Ninja Scroll" as an adult. "Ninja Scroll" is still just as awesome today as it most likely was 20 years ago. The fluid fight scenes are cinematic gold. The animation is beautifully done regardless of the era. The film looks great all around. The story is a good one that has since been copied time and time again. If you have not seen this film yet, do yourself a favor and get to it.

I will wrap this puppy up and say "Ninja Scroll" gets: