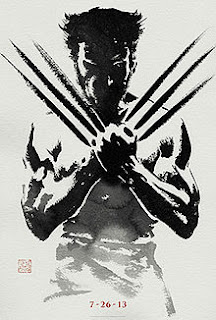 With the release of Wolverine's second solo effort, this time the confusingly titled "The Wolverine" which is easy to mix up with the general title of his first effort "Wolverine" which in turn was a shortened version of the shitty title for that film "X-Men Origins: Wolverine," we get a film based on the fan acclaimed graphic novel where our titular hero finds himself going to Japan to hang with some ninja and samurai. Luckily, despite the premise seeming like one of those last ditch efforts to make something interesting (let's see Wolvie claw his way around Japan!), "The Wolverine" feels nothing like that. It's dark in tone, simplified for effect, and really focuses Wolverine's character growth. It's everything I wanted from this film.

Wolverine (Jackman) has had a tough time after the events of "X-Men: The Last Stand." The death of Jean Grey (Janssen) weighs heavy on his mind and visions of her haunt him even as he secludes himself in the Canadian wilderness. When a young Japanese woman Yukio (Fukushima) tracks him down to bring him to visit a dying man he helped save in World War II, he reluctantly agrees and soon finds himself in a war between corrupt business men and Yakuza.

"The Wolverine" is, at its core, a completely different movie than any "X-Men" film before it. Also at its core, "The Wolverine" is an entire antithesis to the atrocity that was his first solo film. This film is dark, simple, and character driven. While "X-Men Origins" focused on trying to make an X-Men movie out of his solo effort, this film scales itself way back for the majority of its run time and instead focuses on the psyche and growth of our anti-hero - a move that certainly pays off and creates a more serious tone that really engulfs the first two-thirds of the film.

Director James Mangold with writers Bomback and Frank seem to understand why Logan is an icon and great for adaption to the big screen. Like the references and themes that "The Wolverine" pulls from Japanese cinema and lore to add to its tone, Mangold and company decide to really focus on the anti-hero of Wolverine. Characters reference him as a nightmare, ronin, and monster and its this battle of his own redemption that is far more impressive than any of the plot. In fact, the plot serves the character than the character serves the plot and its this distinction that allows this film to flourish. Match this with another strong performance from Hugh Jackman and this film knows just what it needs to focus on.

To retain this focus, "The Wolverine" does itself a service by toning down the secondary characters and instead of just throwing random mutants around like its fucking confetti, they build a few strong supporting cast and use them to support the plot and lead. That's a weird concept. A supporting cast that doesn't try to steal every scene? We haven't seen that in a while from an "X-Men" film. I have to also give film credit for not only building impressively strong secondary characters like Wolverine's new 'bodyguard' Yukio and Mariko with actual character arcs, they use fitting cast members of up and comers. I appreciate the fact that they keep most of the secondary characters Japanese to fit the plot and then actually write them as real characters and not flash-in-the-pan broad stroke caricatures. Even smaller roles like that of Mariko's father and her protector Shingen feel far more fitting.

Enough about plot and characters though, I'm sure the PG-13 audience was bored that the film focused on dialogue and character development instead of action. So let's talk about Wolvie kicking ass and *snikt* cutting people. Well, Mangold is quite versed as a director in action and his style takes the action into a more personal and darker level to match the darker tonality of the story. While its obvious that producers and Fox wanted some spectacle to the film with a massive adamantium Silver Samurai that Wolverine has to box against and a CGI heavy fight on top of a bullet train as a bit of filler, Mangold ably handles both without losing too much of the purpose of the film. In fact, most of the rest of the film is more martial arts oriented with plenty of hand to hand combat. A chase through the streets of Tokyo runs with a Western vibe to it and a brutal sword fight in an almost colorless hallway of blues and blacks uses the Japanese motifs to vicious perfection. Even though final battle gets a little too cartoonish, the action is well placed and superb here - keeping the film's personal tone and negating the now over popular "destruction is awesome" action that has consumed most of the other summer block busters.

While "The Wolverine" might not be perfect by any means as its obvious how much darker and better the film could have gotten with that illustrious 'R' rating (they did manage to throw in a pretty awesome 'f' bomb), it was just what this franchise needed: a vicious, dark edged, character driven spin off tale. With the upcoming "X-Men: Days Of Future Past" seeming to indicate the most epic of all of the films, I'm glad they got this film to do things right with the iconic Wolverine. If you are looking for that "X-Men" spectacle that "First Class" and "X2" refined then look elsewhere...this is a dirty and personal film that just happens to feature mutants. It's everything I wanted from the first "Wolverine" film - and didn't get until now.

Written By Matt Reifschneider
Posted by DarkReif at 8:50 PM