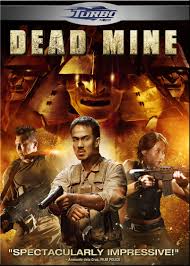 Being straight up, I totally bought “Dead Mine” on a whim. Perhaps it was the fact that Joe Taslim was on the cover in an obvious attempt to attract those who loved “The Raid” or perhaps it was the fact that it was a super cheap Blu Ray that featured a military squad fighting undead samurai. Doesn’t matter, because I was sold on both accounts and purchased “Dead Mine” knowing little to nothing about the film. Continuing with me being straight up, I actually enjoyed the film for the most part. It was just enough cheese, action, and “Resident Evil” inspired horror to keep my attention even if the third act falls apart.

A group of mercenaries are leading a small group of historians and archeologists into the remote island jungle of the Phillipines. Their task: to find an abandoned WWII Japanese bunker that might hold information never privy to the world previously. When a group of pirates caves in the bunker around them though, the team is forced to face an evil that the Japanese were not ready to release…

I’ve already made an acknowledgement to the “Resident Evil” series in the first paragraph (not the films, but the games to clarify) and this film has that same distinct survival horror meets action feeling that those games utilized. A group of military men and nerds trapped in an underground bunker filled with monstrous zombie like creatures with a secret waiting to be unleashed on the world? It might not be original in concept, but dammit if it doesn’t work for a good chunk of “Dead Mine.”

Although Joe Taslim was in a predictable small role, I was generally impressed with some of the acting here. It’s not Oscar worthy, but for a low budget film I had never heard about I was hooked. While its hit or miss overall between people (the scientist couple are terrible), the character work is enough to get me to care whether or not they make it through the hordes of “The Descent” like monsters (including a section where they have to crawl through dark tunnels being chased by them) and eventually the golem-esque undead samurai that show up at the mid way point.

The film does a decent job building up some decent excitement and scares as our heroes are forced to find their way through a dark labyrinth and uncover a few secrets to what they have truly stumbled into. It has decent enough special effects and the samurai at the end make for a foreboding force of terror at times. Again, it might not be original in concept, but the execution is effective enough that I was able to enjoy the ride. The monsters may not have been top notch, but that’s what you get with a straight to home video monster flick.

By the time we reach the final act, which does take a rather odd turn of questionable character choices and ends on a rather artistic note, I was solid on the idea and enjoyed the ride that “Dead Mine” provided. Is the film an instant classic? No, but for a film I simply ‘discovered’ I had a rather fun time with it.