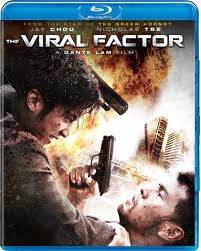 While Dante Lam has always been a director that has intrigued me, I had never actually seen one of his films until "The Viral Factor." While this film is certainly entertaining in many ways, it suffers from certain 'Bay-isms' that seem to layer on visual action style in place of truly well paced sequences and tension. From what I gather, this is one of Dante Lam's lesser films and I'm glad to hear that considering how much I wanted this film to kick ass like it could have. While the film definitely cakes on action and high octane chase sequences, it sort of forgets to have a main plot and it undermines the entire film from reaching the goals it could have.

When a fellow special ops solider (Andy On) betrays his team to steal a virus for profit, Jon Man (Jay Chou) is left with only a few weeks to live from a bullet in his head. Determined to make things right, he seeks out his long lost brother (Nicholas Tse) who has become a rather notorious thief and is being used by his former team member to orchestrate a deal for the virus. Can the brothers over come their differences to partner up and save the world?!

Despite its rather intriguing "Mission: Impossible"-esque virus plot line about cops going rogue, stopping terrorists, and saving the world, the plot seems to always play second fiddle in this film. The entire film seems to have to bolt through the motions of character back stories and virus jibba-jabba just to get us to seemingly random action sequences to keep us entertained. There is a pseudo built romantic revenge plot to kick off the film in an awkward way. There is a lost daughter/niece kidnapping plot that's rushed through in the end. Even the main character plot that features two long lost brothers on two sides of the law having to work together against a vicious enemy, as cliche as it is, has to be completely brushed over for the sake of getting it all in. While these brotherly moments definitely make for the highlights of the film with some strong chemistry between the two leads and some fairly strong emotional and moral moments, they come few and far between to justify the ridiculousness of the rest of the film. Not that plot is particularly relevant in a film like this, but considering how much is jammed in there it would have nice if something stuck beyond 'moments' to the action.

...and "The Viral Factor" slathers on a Hollywood style action to cater to the over the top aspects of the film. While occasionally it works, there is a pretty awesome chase/fight sequence in a train that worked for me, most of the time it falls flat. Yes, the action is entertaining as we get some pretty solid gun fights in the finale, but for a highly respected action director like Dante Lam and a duo like Jay Chou and Nicholas Tse it comes off as trying too hard to be Hollywood-esque. For example, there is a random helicopter chase through skyscrapers that feels remarkably like some crappy mainstream Brett Ratner film then it does an Asian action flick. It's these moments that really sort of undermine the better action sequences of the film.

"The Viral Factor" was decent fun with some strong action moments and some thoughtful character interactions, but the those moments are fleeting and fairly rare. The rest of the film comes off as one massive missed opportunity to capitalize on all of the elements that should have made it an instant modern action classic. As is the film entertains, but it rarely rises above that.