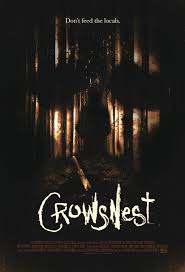 While browsing through the IFC Midnight catalog one day, I stumbled upon a trailer for "Crowsnest." While the found footage horror genre has become the bane for most horror fans, it has provided its fair share of solid films for fans and detractors alike. Unfortunately, "Crowsnest" is not one of those films to kick the genre to that next level. In fact, I'm tempted to say that this low budget and independent horror film might be one of the more boring films of the genre as it rarely plays up the scares, gore, or tension.

Five friends, two couples and a little sister, are out to have a sweet weekend getaway from the fast paced city life. They are heading their way into the dense, remote woods to spend some time with their brand new video camera. Unfortunately, they get lost on the way there and end up in a place called 'Crowsnest' - where they may or may not find the end of the line.

Blah, blah, blah, blah, BLAH. Despite a fairly intriguing trailer, "Crowsnest" is impressively NOT intriguing. The basic premise is one that has been used for a ton of previous horror films and it is one that seems to be the basis of 90% of found footage horror. Even from there, "Crowsnest" seems to fail to pull in the audience with its execution. The characters are typical horror affair (even going as far as injecting the entire weird love triangle/betrayal angle between a few characters) with little in the way of originality or strong development. The horror of the film is about as predictable as it gets as we have our characters thrown into terrible circumstances only to have them picked off one by one in generic slasher style ways. While I'm not at all about films being 'original' to be good, I do expect a strongly built foundation for them to build upon and that's sadly lacking here.

To make matters worse, "Crowsnest" is a rough found footage film too. While its foundations may be rocky at best, sometimes a film might overcome its issues with style or something of a clever element that it can run with. Despite having a 'killer RV' filled with homicidal hillbillies as its villain, "Crowsnest" tends to be forgettable even in this regard. The style of the film is far too focused on creating a 'panicky' feeling with its slew of shaky camera shots of foliage that grow to be insanely boring after a while. The film does have a moment of brief hope in the middle section of the film when our cameraman finds the RV and gets around to discovering some details, but its quickly abandoned for returning to the forest to show us quaking ferns and trunks. By the time it rejects its chance to deliver a new direction or something interesting/entertaining, I had given up hope.

To be honest, you might as well just skip this film. Even fans of found footage horror are going to find themselves bored with "Crowsnest" as it seemingly runs through all the motions with little intent of doing anything better than the standard with depressing results. Found footage has always been seen as a genre that's rather substandard and "Crowsnest" is one of those films that gives it a bad reputation. It's not scary, it's cliche, and - worst of all for a horror film - it's boring. Give it a skip.