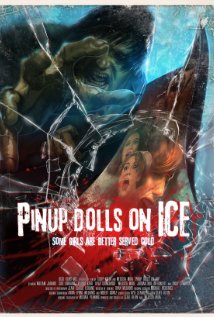 What can be said about a film that is a sequel to a complete travesty? Apparently not much since unfortunately Geoff Klein’s “Pinup Dolls On Ice” follows similar footsteps of its predecessor with only a few minor improvements. A basic slasher with very little to no plot, the film doesn’t seem to know if it wants to be taken seriously or be a complete joke. Though it seems like in this case, it already is a complete joke with how derived and bland it is with less than mediocre acting, a terrible script, and cookie cutter characters that make Jason Voorhees’ victims look like complete geniuses. A film of this type has potential to fall into the same category with self-awareness such as that of the “Hatchet” franchise. Instead it only comes off as something that could have been made by anybody and nothing stands out about it.

The middle film in a planned trilogy leaves us a few days after the events of the last film. Well at least that is what they want you to believe. Very little is referred to the events of the first film and our surviving heroine barely seems to care about what has happened at all only a few days later. We soon meet our “Pinup Dolls”, a bunch of bimbos with attitude who of course only serve to take their clothes off and get killed in this film. There’s nothing that distinguishes the girls from one another other than their outfits and even then, they slip into scantily clad matching ones which basically makes them clones of one another.

Moe is back and locates the campground where the girls are to put on a show and goes about his routine killer rampage. Be prepared to hear grunting every 2 seconds, a liking to destroying every barricade in his path, and a huge mistake that is unfortunately repeated in this film, off screen kills. This is not a matter of budget as there have been even lower budget films that have accomplished some entertaining kill scenes. Pretty much every death is accomplished with splashing fake blood to the wall or covering the victims with it. We are given more back story to our killer in the form of the sheriff who tells something similar to an urban legend in the most monotone and dreadful voice. It’s pretty laughable and forgettable. Though we also learn of why our killer likes his ladies on ice. Which I will admit, is pretty morbid.

There is however one addition to the film that is welcome. The only other prominent male character other than the sheriff and Moe, Clay serves as actual comic relief to the film which it is in dire need of. In his 1970s douchebag mustache and haircut, the character is just as oblivious as the women but you can’t help but laugh at this creep and his purposely cheesy character. In this case the acting adds on to the humor. Unfortunately one additional character can’t save a film.

The way the film carries out is pretty random. As the Pinup Dolls are stalked and killed one by one, nothing really indicates why the few women left are even there. It’s just the simple process of elimination taking course. The climax isn’t anything that is much more different than the rest of the film and at the end; I was left thinking why did I sit through this abysmal movie.


Unless you like to put yourself through the unpleasant experience of watching this film, this is highly recommended to avoid.

Written By Elise
from
Ramblings Of A Deadite
Posted by DarkReif at 9:21 PM