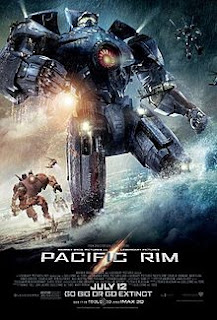 It's not very often that I get to review a kaiju film. My brother Eric is in charge of the genre because a) he loves giant monster movies like no one else I know and b) as a cult film reviewer of anything post 1990, most of the genre has been watered down into SyFy channel original films - which is a terrible turn for the genre. If there was anyone that could understand the appeal of this genre though, it's most certainly Guillermo Del Toro. The man eats and breathes cult film making and yet still delivers entertaining and easily consumable films. While his production resume isn't as stellar as it once was (*glares at "Mama" on the film shelf*), his directorial career remains one of my personal favorites even if people tend to overrate him occasionally. I did keep my expectations a bit hesitant going into "Pacific Rim" though, due mostly to trailers seeming to cater to the "Transformers" audience. I'm glad I did because in the end, while there are elements in the film that prevent it from reaching a perfect status, I enjoyed the shit out of this film. It caters to the kaiju fan enough to allow us enough faith to overlook the obvious scripting and artistic issues made in the film.

In the near future, a rift in the dimensional fabric of our world will unleash kaiju onto the Earth. These massive reptilian creatures seem intent on destroying the population, so humanity fights back with giant robots called Jaegers who are piloted by two individuals. It's been years since the battle has waged and the kaiju have grown stronger and more advanced as they seem to be appearing at a greater rate. It's up the last of the Jaegers to take a last offensive against the other worldly creatures and an ex-pilot (Hunnam) is called back to duty to lead the charge.

I found it quite obvious that Del Toro was intent on keeping this a family friendly and light-hearted summer block buster experience. In many ways, it works splendidly that way. With all of the new dark/dreary serious block busters that have failed me this summer (*glares at "Man Of Steel" advertisement on TV*), this was just the kind of film the doctor ordered. It's simple in all the best ways, it throws you right down in the middle of the story and doesn't burden itself too much with it's origin story, and it paints simple motivations for its characters. It's focus is to be a fun and entertaining film, much like the Japanese kaiju films that came before it, and it delivers that. The characters, particularly many of the secondary ones, are almost cartoonish as we see Charlie Day run around with broken spectacles and screaming while we are treated to a rather awkward love story with a Japanese woman with a streak of blue hair and a penchant wide eye deer in the headlight character shots. This is mostly what I came in expecting "Pacific Rim" to be like and it delivered in that sense. The pacing was brisk, the characters charming and fun, and the action shot straight into the heart of the 8-year old boy I used to be.

My issues with "Pacific Rim" mostly lie with Del Toro's ability to rise above 'just being a genre film.' He took a silly concept like "Hellboy" is amazing heights with the second film and he even turned a fantasy tale like "Pan's Labyrinth" into an earth shattering parallel about war and childhood innocence. That is not the Del Toro on display here. This is the "Blade II" Del Toro. That being said, I love that Del Toro too, but do not mistake this film for being more than a film where simplified characters drive giant robots and beat the living shit out of giant monsters. A prime example of where "Pacific Rim" actually tries to be 'more than' that kind of film is the entire scientific subplot featuring Charlie Day. While the plot added some much needed humor and charm into the film, it was completely asinine in its science, logic, and necessity to the plot. Charlie's character Newton explains that the creatures are all clones (which does not make sense since they ARE ALL DIFFERENT) and his entire sub plot that includes a half assed thought through kaiju pregnancy which adds nothing to the film that culminates in a 'twist' that has little to no relevancy to the end game. While I enjoyed his manic humor and energy, his role was pointless and added that pseudo science that we didn't need to enjoy the film. To be honest though while the critic in me was screaming foul at the films attempts to justify its ridiculousness, this isn't anything we haven't seen in a previous "Godzilla" film. So if Del Toro's idea was to use the same jack ass science to justify his monsters as they used in those 'classic' films, then he succeeded as a great homage. It still doesn't make sense outside of that.

On the other hand, I came to see giant fucking robots thrash around with giant fucking lizards and I definitely got that from "Pacific Rim." While I felt the film definitely used too many night battles for me to properly see all the awesome shit that was going on (maybe I'm just getting too old...where's my bi-focal lenses, dammit!?) and some of it didn't make the most sense (if you have a fucking sword that can slice kaiju like butter - WHY WEREN'T YOU USING IT BEFORE?!), I still had a blast watching it. When we see a Jaeger dragging the giant tanker ship to use as a bat on the creature - I was ready to give it a standing ovation. Del Toro and company certainly pulled off much more interesting action than I expected by making sure none of it felt too repetitive. Hell, one of the kaiju even has a EMP on its back. Take that Gamera and your flaming flying shell of death! This fucker has come prepared for the new age! For kaiju and giant robot fans, this is definitely a film to see in theaters just for this point even if the story and characters come off as lackluster.

So what though, right? When I criticized the "Transformers" films for trying to be smarter then they needed and 'nit picking' the script all I was told was that 'who cares...its just big robots fighting.' True enough, but it would help if the film makers would understand that too. While this film is HANDEDLY better than anything Michael Bay and his terribly racist robots could ever muster, it tends to think itself too highly at times. This is counterbalanced by a wonderful sense of fun and wonder and some strong action sequences of pure destruction that had my 8 year old self ready to hit rewind on the VCR and watch it again. While "Pacific Rim" sits in an awkward place of wanting to be smarter than it is but still being too silly and simple to succeed at is, the film is entertaining as hell and any fan of kaiju and giant monster films needs to see this immediately.

While the critic in me is still skeptical about what I witnessed in "Pacific Rim," the cult kaiju fan in me is still reeling at being able to see this kind of spectacle in a big budget film with all the awesome robot and creature designs. This is not a film for the overly critical for sure, but if you shake off the logic and just focus on the fun - "Pacific Rim" delivers an ocean full of fun and adventure.