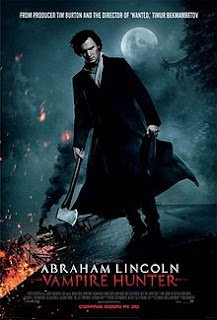 Despite my initial excitement for a project like “Abraham Lincoln: Vampire Hunter,” I hesitated to see it. The film seemed to have a lot going for it, but it was a premise that was either going to be a fun, awesome B-movie time or an over zealous fail. I was afraid of the latter with all of the talents involved behind the camera and with its great character actors. Thusly, I ended up waiting this long to see the action filled horror satire. While the film is neither an awesome time nor an over zealous fail, “Vampire Hunter” tends to be a little of both – which is still more or less a disappointment considering its premise.

After his mother is taken ill by a vampire, a young Abraham Lincoln (Walker) decides its time to fight back against something he doesn't understand or know how to fight. When he learns that he is no match, a mysterious stranger (Cooper) takes him under his wing to become a hunter, training him in the ways of how to hunt and destroy these creatures of the night. What Lincoln doesn't know is that his future as a man of power and influence will always be one fighting the vampire scourge and his fight may change the course of history.

The most intriguing aspect of “Abraham Lincoln: Vampire Hunter” is just how split the film feels like between its first half and second half. The first portion of the film is a fun, clever, and exciting romp that blends the horror, action, and silliness into a rather enjoyable B-grade film. Our introduction to Lincoln as a vengeful and beaten young man is fun and exciting to watch. While the film certainly carries an almost kung fu inspired structure at this point – a young man is torn down, finds a master, and trains for years in combat and spiritual cleansing to eventual bring justice – never does it feel tired or forced at this point. Walker pulls off a young Lincoln swell and our villains are uproariously cartoonish to match the ridiculousness of the action. Watching Lincoln eventually learn to chop an entire tree down in one swipe is hilariously enjoyable. I loved every minute of this transformation.

Then the film crumbles right before our eyes. About half way through the film we are treated to a massive fight as Lincoln goes to save his friend from the clutches of the evil vamps. Upon further retrospection after the fact, this, partnered with some more time spent developing stronger character build between Lincoln and his cohorts (it would have helped had they strengthened the romantic sub plot with Mary Todd which sort of comes out of the blue) should have been the ending to the film. From this point on, the film rushes through the rest of Lincoln’s political career to get us to the Civil War and so the film could end on a clever ‘twist’ with his theatrical excursion. We spend so much time in Lincoln’s youth that the rest of this feels tacked on and forced. While the finale has its moments of fun action, none of it really matches the hand to ax combat that graced the first half of the film. It drags on character development wise, throws in random tid bits of twist, and forces a more serious tone on the audience – a very poor choice considering how fun and ridiculous the first half was.

While I did enjoy “Vampire Hunter” for what it was, it did not live up to its own premise. They should have focused on trying to franchise the film into more entries by carving up Lincoln’s lifetime, but alas they try to jam it all into one film. The action is fun and over the top (as is normal with director Timur Bekmambetov’s work), but even that can’t fully save the film from falling into it’s scripting errors. Overall, the film was fun and I enjoyed it, but it never reached the heights that it could have and it tends to fall short there.