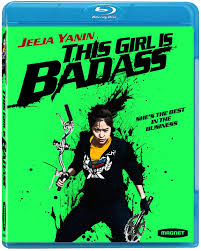 As a person that tries to support the Thai action scene as much as possible, I was all over the latest US release of Jeeja Yanin's "This Girl Is Badass." Despite her slightly larger than cameo appearance in "The Kick," I was stoked to see her in full on action as the lead in the film. Unfortunately, "This Girl Is Badass" is less 'badass' and more straight up 'bad.' Director Petchtai Wongkamlao, a prevalent character actor in other Thai action films, definitely has a stronger sense of comedy then he does action with the film and it shows here. Even though I laughed more at the ridiculousness of the film then I did cheer for the action, "This Girl Is Badass" comes off as a poorly written almost spoof like film instead of the action comedy it wanted to be.

Jakkalan (JeeJa Yanin) has been raised by her Uncle Wang (Phetthai Wongkhamlao) to be just and thoughtful in what she does. As a bike messenger, she is the best in the business and uses her talents of martial arts to aid her. Unfortunately, a package she delivered previously sets into motion a gang war between two mobs ready to kill anyone in their way.

Like the bright colors of the film's cover and title sequence, "This Girl Is Badass" is...well, it's childish. The humor is very slapstick in style with lots of odd focuses in character design. While our leads tend to be connectable in some way or another at least, most of the secondary characters seem to be random broad stroke cartoons. Her boss, who might actually be the funniest portion of this film with his stone cold portrayal, is quite literally as close to a cartoon character as they get when he rides a stuffed horse and wears some of the weirdest outfits I have seen in a movie since "The Hunger Games." There is a mob boss with a squeaky voice, a stuffy shirt childhood love interest, and a hench man who screams his own theme songs. While the humor of its slapstick and odd characters can work, like how everyone treats the love interest as pathetic, most of the humor is too random to work properly - like the weird running theme of angry midgets.

While the humor is hit or miss, it's hard not to be be stricken by the charm of our two leads and in particular screen presence of Jeeja Yanin. Unfortunately, their charm is not enough to carry over the other elements that come off as misses. The action, while focusing on martial arts instead of bike stunt work like I was expecting, is mishandled more often than not and feels sluggish and oddly shot. Potentially awesome ideas like fighting on a moving bike rack or a slow motion rain fist-to-cuffs seem like failed dreams instead of the usual awesome fight sequences that Thai films cater to. Even the plot is far too confusing as it jumps subplots for the sake of humor or getting more screen time for secondary characters. By the time we get to the finale I not only could care less about how it turned out, but I was burned out on the humor too.

All in all, "This Girl Is Badass" is one massive missed opportunity. It occasionally charms with its dialogue and with Jeeja's screen presence, but the rest of the film is a bust. The humor is more miss than hit, the characters are cartoons that didn't work, the plot is too sporadic, and the action is some of the worst to come out of a Thai film since I can remember. This one is a skip as far as I'm concerned unless you are a die hard Thai action fan.