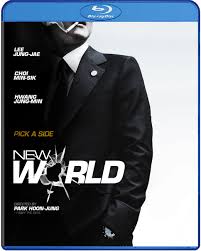 When it comes down to it, South Korea is simply putting out the best thrillers in the market today and it's Well Go USA that's getting those awesome films to us. The US distribution label's latest acquisition happens to be the dramatic gangster style film "New World." To be honest I've been a little burned on recent gangster film output (or maybe it was the atrocity that was "Gangster Squad" that had me burned), but the sheer talent that went into "New World" more than makes up for it. Written and directed from the man who wrote the phenomenal "I Saw The Devil" and "The Unjust" with the acting talents of Lee Jung-jae, Choi Min-sik, and Hwang Jung-min, I was instantly intrigued by what could be delivered. Even with such high expectations, "New World" delivers on all grounds. "New World" is a PHENOMENAL film. It's a combustive combination of "The Godfather" and "Infernal Affairs" with it's character study that's punctuated with enough twists and atmosphere that its slow burn premise rarely feels 'slow' at all. It's simply a modern gangster film masterpiece.

Ja-sung (Lee Jung-jae) has been caught in a crossfire. The head of the Goldmoon syndicate in Korea was killed in a car accident. His boss, Jung Chung (Hwang Jung-min) is in a race with his rival Lee Joong-goo (Park Sung-woong) to take the seat as leader of the massive syndicate. Normally this would be a great thing for Jung Chung's right hand man, but since he's been an undercover cop for the last 8 years the upheaval of power has created paranoia like no other. He wants out, but his handler Chief Kang (Choi Min-sik) is pressuring him to stay. There's a new plan. A plan that Ja-sung will play a big part in. How much will he have to sacrifice to play the game?

While the synopsis of the film above might indicate a film chock full of action, treachery, and tension, it's important to know that while all of those elements are included in "New World," the film is handedly a dramatic character film more than anything else. With the stunning acting talents of the cast, including an impressive and subtle performance from Lee Jung-jae whose life is being battered around between the mob and the police and the scene stealing dynamics and intricacies of Hwang Jung-min who steals every damn moment in the film, its instantly hard not to be pulled into the small details of the film. When you have essentially throw away characters, like the lead character's wife, who make the audience understand the complications of a smile like they share in the final act before he leaves his apartment, pull you along for the ride then you know that a film like "New World" is going to rise above the highest standards.

While the film handedly runs over the two hour mark, never does it feel that way thanks to a sparkling strong script from Park Hoon-jung. Like "The Godfather," "New World" pushes itself as a film of themes in loyalty and trust that's built into a tense atmosphere of paranoia and suspense. Director Park Hoon-jung ably injects characterization and the plethora of twists in the latter half with such precision and grace that the flow of the slow burning build of the film is never lost. It's watching a masterpiece unfold right in front of you in so many ways that by the time the explosion of knives and bats that erupts between the two factions in the car garage you are so ready for a break from the suspense that the blasts of intense violence are a relief and not extreme at all. It's a trick that Park Hoon-jung and company use so effectively that I didn't even know it happened until it was over with I was so intently into it.


While its understandable that many may not buy into the slow burn characters as I did, "New World" is a massive film of superb execution. It rises above the norm to set a new standard for modern gangster film with its flawless acting, writing, and direction. If you are in any way, shape, or form intrigued by this film then you need to immediately purchase it from the links below or at your local retailer when it has its release. One of the best films of 2013 and one of the best films in the gangster genre.