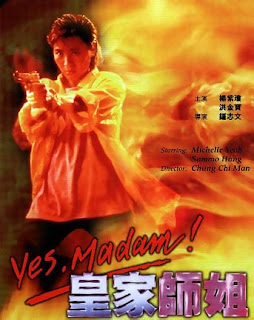 Long before Michelle Yeoh became an international star culminating with her role as a Bond girl in “Tomorrow Never Dies”, she had her first major role a decade earlier with the action hit “Yes, Madam” in her home town of “Hong Kong”. The film was a for-runner in the peculiar genre knick-named by fans as “girls with guns”, creating a franchise impressively consisting of six sequels and a tidal wave of imitators. I will admit up front that I saw many of the sequels before laying my hands on the first entry and was a huge fan of the “In the Line of Duty” franchise before finally watching  the film that started it all. Seeing many of its impressive sequels first may have been my downfall as I came out of the film just a tad disappointed though at the same time being impressed by its violent and dangerous fight sequences. 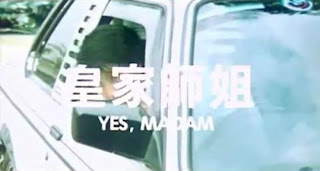 Yoeh is a sexy Hong Kong cop who wows with her martial arts abilities and incredibly dated 80s fashion sense. While visiting a friend she discovers that he has been assassinated and the killing is somehow tied to a trio of identity thieves that steal peoples passports. With the help of a hard-handed British agent (Cynthia Rothrock) that likes to beat suspects during interrogation, can they solve the case that is somehow tied to a big shot crime syndicate? 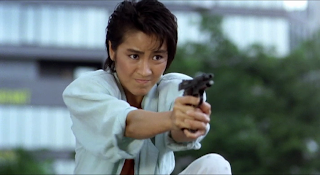 I did wince a little during the opening credits when I saw that Sammo Hung was a producer on the film. Sammo, along with his partner in crime Jackie Chan, has a tendency to make his films a tad too slap sticky and comedic for my taste especially when it comes to hard-hitting crime films. As I suspected his aura is felt throughout and the film tends to be a little overly silly, especially with its comedy trio of identity thieves (one portrayed by famous film director Tsui Hark) who eat up much of the screen time. This heavy dose of comedy does not mix well with the extremely violent and bloody action sequences. Many of the sequels had humor but it was more sparse and subdued but not here as it is laid on just a little too thick for a violent crime film hindering many of the more powerful actions sequences.
Along with being Michelle Yeoh’s major role debut, “Yes, Madam” was also the debut for Cynthia Rothrock, another name that will be more than familiar for Martial Arts connoisseurs. Rockrock owns her role and it’s almost heavenly to see her and Michele Yoeh kick ass in their dangerous stunt ridden martial arts fights. If it weren’t for the extreme pilfering of John Carpenter’s score from “Halloween” infecting the soundtrack these could have been some of the best ever to hit the screen. Nothing like horror suspense music to ruin an action sequence… 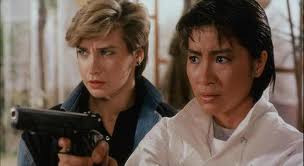 If I would have seen “Yes, Madam” before watching many of its sequels I might have liked it better. Most of the sequels just balanced out the extreme violent action and humor to near perfection and the heavy comedic tone of “Yes, Madam” just didn’t meet my expectations and ruined many of its more powerful scenes for me. Even with this major downfall the action sequences are still awe-inspiring, on par with many of its sequels and it’s also great to see a violent action film with the fairer sex in the lead performances. Audiences in Hong Kong also dug the new subgenre and “Yes, Madam” became a huge success but fans of the film may be a little confused when trying to figure out the franchise it created. “Yes, Madam” got released under many different titles around the world, most notably as “In the Line of Duty” in many surrounding areas. The film would eventually become better known by this moniker and many of the later sequels would use this title scheme. The sequels go as follows: “Royal Warriors”, “In the Line of Duty III”, “In the Line of Duty 4”, “In the Line of Duty V: Middle Man”, “Forbidden Arsenal” and “Sea Wolves”. I highly recommend hunting down the sequels as the series only gets stronger from here.

Written By Eric Reifschneider
Posted by Cronosmantas at 8:24 PM