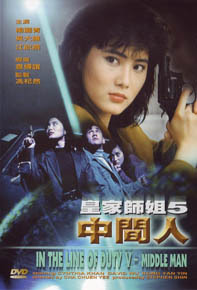 IN THE LINE OF DUTY V: MIDDLE MAN

Aka "The Middle Man

Following the huge success (in Hong Kong at least) of the franchise pinnacle “In the Line of Duty 4” it would only be natural to CHANGE THE FUCKING FORMULA! Maybe I’m being a little brash but damn it if it’s not broke, don’t fix it. Here the filmmakers decide to tinker with the franchise equation for success by adding in more drama and negating some of the well-spaced out humor. The result, though not bad, is small step down from the praise worthy fourth film. 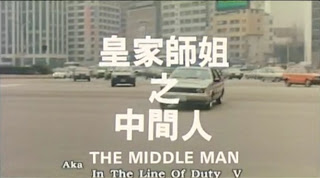 Cynthia returns as the tough-as-nails police woman for the third time in the series only to run into trouble when her visiting cousin gets blamed for espionage and selling Chinese secrets or some bull crap like that. Dodging bullets along the way, the two make their way up to Korea (don’t ask) to take down an aging gangster. 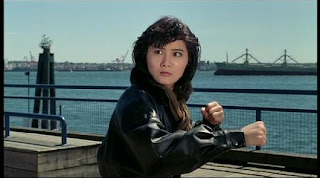 The incomprehensible plot is an excuse for plenty of scenes of Cynthia, shooting, fighting and leaping… what we come to expect from an “In the Line of Duty” film. The problem is the added dramatic moments. Some might view this as a positive element, a key ingredient films in the franchise were lacking up until this point. This would be fine and dandy if the plot weren’t so plodding and unappealing allowing the viewer to lose interest until the next action scene, something the previous installments were never guilty of. This added drama takes away from the likeable sparse humor, an element that “Part 4” had perfected. Still I would take the more dramatic approach of this film than the overly silly humor that infected the first entry "Yes Madam" far too often. 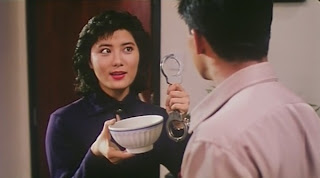 Despite the throw-away plot, the action is still grand and the audience only has to wait a measly 6 minutes before the first jaw-dropping stunt sequence. Nothing gets me going more than a dangerous action sequence with a hot Asian police woman running around in her dated 1990 wardrobe. The highlight has to be the climatic fight sequences between Cynthia and Shaw Brothers legend Lo Lieh (“King-Boxer”) and blonde real-life female Kumite champion. Great stuff for Hong Kong martial arts aficionados. 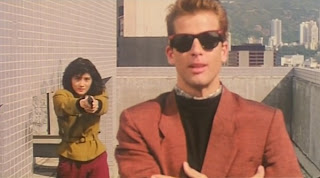 There’s enough violent action and stunts to keep fans of the franchise and Hong Kong action flicks happy but this is definitely the weakest sequel so far. Considering it’s the fifth entry in the series it is still pretty impressive as most franchises that reach the number 5 mark usually start to become pretty terrible. Perhaps with less drama, less crummy ‘blue’ night lighting and a better plot this could have been just as good as the rest of the sequels. Oh, and Donnie Yen also returning would have helped immeasurably. This wouldn’t be the last “In the Line of Duty” film as Cynthia Khan would return for two more installments (“Forbidden Arsenal” and “Sea Wolves”) but those are next to impossible to find on the home video format so I will put my heart and soul to hunt these bad boys down.

Written By Eric Reifschneider
Posted by Cronosmantas at 1:14 PM