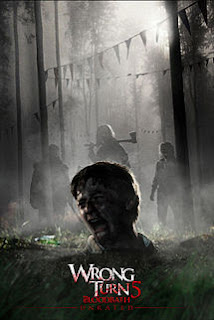 Far be it for me to say that I was expecting a whole lot out of "Wrong Turn 5." In my opinion the series might have been a decent throwback slasher series to begin with, but when Declan O'Brien took over as director and writer on "Wrong Turn 3" the whole franchise went to shit. And I mean shit. "Wrong Turn 3" and "4" were pretty bottom of the barrel when it comes to direct to video horror and when it was announced that O'Brien would be returning for the fifth entry my hopes were already shattered. I will say that "Wrong Turn 5" (whether you want to include the useless subtitle or not) is better than the last two, but that really says nothing in end as the film is still low brow horror at its best.

It's party time for a handful of college kids as they head to a rural mountain town in West Virginia to check out the local Mountain Man Festival on Halloween. They have their drugs, their youth, and a wild streak they need to get out and this seems like the perfect place to do it. That is until a group of inbred cannibalistic hillbillies decides to end their fun. When the "father" of the group (Bradley) is jailed by the local sheriff (Arfwedson) though, the three disfigured and malicious hillbillies descend upon the town killing everything in their sight.

There was one component missing that really makes "Wrong Turn 5" the atrocious direct to home video film it is: logic. I know that seems like something you don't necessarily need for a slasher (the original "Black Christmas" didn't have motive for example), but the writing and plot work that goes into this film rises above that. It becomes essentially just a series of brutal killings, poor effects, and horrible dialogue that rarely cohesively melds together to form a narrative. It rarely makes sense, the characters do the stupidest things, and attempts at being clever with the kills wears a little thin. Even with the horrible consistency of this series, "Wrong Turn 5" can't seem to finish a thought despite its rather interesting idea of having the cannibal hillbillies siege a police station.

And since O,Brien can't write to save his life, one would assume that he would be able to somehow save the film by strong and energetic execution...which is also not the case. The kills are forced and often far too nonsensical to work (as cool as it is to see someone buried to the neck get hit with some kind of large lawn machinery - it just doesn't fit in the plot or make sense in the narrative), the special effects are pretty simplistic and low budget, and the actors seemingly run around stiffly spouting lines that they look too irritated to say properly. There's not a whole lot of style to the film, its pretty by the numbers, and the film just looks cheap overall.

In fact, the only reason I say that its better than the previous entries is that it Doug Bradley owns his role. The role is a fairly silly role (a father figure to the hillbillies that never existed before in the series) and he spends a good portion of the film in a jail cell, but man can he deliver some of the stupidest lines with a vigor that this film never deserved. There is a reason that he has lasted this long as an icon in the horror genre and his presence in the film easily kicks it to the next level.

The end result for "Wrong Turn 5" is as simple as this: if you were a fan of the previous two films, then you are going to love what this film has to offer. If you were disappointed with the quality of the previous two films like I was, then you are going to find yourself trodding down disappointment lane again. "Wrong Turn 5" is nothing we haven't seen before with the franchise and despite a top notch performance from Bradley, it remains a slasher of low quality. Not necessarily one that is going to be adding any new fans soon.

If you are a franchise whore like myself, then its pretty apparent that you should probably own this film to complete your collection too. Just click the links below at your own risk!