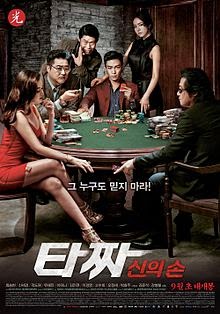 The hilarious, and wild-ride of a follow-up to 2006's Tazza: The High Rollers a.k.a The War of Flower, which was delivered via director Choi Dong-hoon (The Big Swindle, The Thieves), is this time around, brought to us via Kang Hyeong-cheol (Speedy Scandal, Sunny) and complete with his visual flair and unique sense of comedy. But, you're not here for my bragging of a filmmaker (though it will be brought up again, I'm sure), so is the film good? No... it's great!

Tazza: The Hidden Card is set X years after the events of the first film (I can't really remember the years said or shown), in which we see the return of Go Gwang-ryeol (played wonderfully by character actor Yoo Hae-jin), though this time in flashback form, talking to a little boy whilst visiting so and so's house (sometimes the details slip you, damn it). Anyway, point being, we see this little boy get handed money from Go due to his polite manners. The boy goes on and on stating different reasons why Mr. Go should be handing him more and more money (not cheating, being respectful, and so on), and Go chuckles and refers to the kid as a 'tazza' (hustler or player)... and BOOM... title screen!

So, little tazza is now older tazza, played by always exceptional Choi Seung-hyeon (TOP of Bigbang), living his little hustler life, beating people at the game of hwatu (Korean card game that is the main focus of both films). Twist here, twist there, everywhere a twist, twist, and lots of craziness ensues.

I really, as usual, don't want to get too much into the actual plot of the story. It's simple in the means that it's a bunch of people in the corrupt world of gambling, backstabbing and quadruple-crossing everyone in their realm, but it is more than just a cash in on the first film. It was 8 years before this sequel ever came along. As mentioned before, I planned to bring the director of the film up, and now here we are.

Originally the film was planned to be lead by Jang Joon-hwan (Save the Green Planet, Hwayi: A Monster Boy), which could have been interesting, but when this film was being talked about being made, I really didn't have huge interest in it. I couldn't understand why a sequel was being made so long after the first one (not that rare, but still unusual), but then later on realized the film is based of a series of graphic novels (4 volumes of them to be exact.) So I guess in due time, we may see two more installments. Later, it was stated Jang was dropping out and director Kang Hyeong-cheol was attached. Now I was stoked.

Now with that out of the way, and getting back on track to actually reviewing the film, I want to mention the film has Kang's unique way of doing visual jokes via camera movement, and editing. It's difficult to explain, but if you have seen either of his films, you will know. He is here full-on in this movie, and that was something I was absolutely worried about. I know Korea isn't quite as company controlled when it comes to the bigger studios, but since this is a property, all sorts of red flags were raised knowing one of my favorite directors was in.


The film does go from being quite funny and a bit silly to being very dark and very serious, which is something some people may not like about this film. It never bothered me at all due to the fact that even in the more serious moments, Kang manages to still throw in even the tiniest of jokes and they still work, giving you a moment to laugh even though every character on screen may be just one wrong look away from being slaughtered. For that, I have to give this movie total props.

This review is ultimately long-winded, but to condense down in a short recap... here: The film looks wonderful and moves along at a brisk pace. The acting is spot-on from everybody. Everyone in the film has wonderful comedic chops and presence (when needed). When the film goes dark, it doesn't go stupid, and stays fully intriguing and keeps you on your toes. It's nice to see some of the characters come back from the first film and to see them be important this time around as well.

If you want a great Korean film with a great blend of humor and gritty atmosphere, Tazza: The Hidden Card may just be right up your alley... just be sure to check out the first film beforehand, if you want to give two flips about certain characters. Tazza 2 is definitely one of my favorite films of this year, and I can't wait to see what Kang does next.