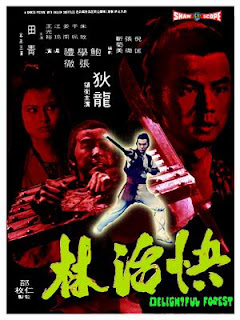 When it comes to Shaw Brothers films, it’s almost a sure thing that the combination of actor Ti Lung and director Chang Cheh is going to deliver some serious entertainment. For better or worse, that combo is an effective one that the studio used time and time again with various co-stars or co-directors attached. Going into The Delightful Forest, it’s this simple duo that drew me to the film – although it helped that it was one of the few Shaw Brothers releases to receive a decent Blu Ray release in the United States (thanks to Well Go USA). However, the quality of this film surely blew away my already high expectations. The Delightful Forest is fun, efficient in its pace, and ultimately impactful by the time the third act wraps up. I’m up to 60 Shaw Brothers movies under my belt now and this is one of the best that I’ve seen.

Wu Sung (Ti Lung) is a rather renowned hero in the martial world known for killing a tiger with his bare hands. When he takes revenge against some dastardly folks for a love squabble gone awry, he finds himself imprisoned. It’s here that he meets Golden Eye, the owner of a tourist village who has been ousted by a diabolical man of great kung fu skill. When Wu Sung agrees to help in the matter, he unwittingly stumbles into a far greater problem that may have him fighting for his life.

Based on one of the story portions from the epic novel Outlaws of the Marsh, The Delightful Forest rarely makes itself feel like it's only one portion of a greater plot. Outside of a somewhat forced opening sequence that has to use a narrator to catch up the audience on a few plot pieces, the film plays it relatively straightforward. Elements used in earlier acts almost always come back to be tied into the story (including a couple running a small restaurant that our hero Wu Sung encounters) and the film rarely tries to throw major twists into the story to make it more complex then it needs to be. This allows directors Chang Cheh and Hsueh Li Pao to really focus on driving the film forward with a brisk pace and the key to making this film work: Wu Sung.


If the plot plays things fairly black and white (we have good guys and bad guys and their motives are justly as simple), it’s the character of Wu Sung that truly carries the heart and deeper values of The Delightful Forest. While the film very much claims him to be a stand up hero, the audience sees a more diverse and fascinating character – a character whose arrogance and moral standings shift as the situations around him take unexpected corners. Ti Lung expertly navigates these subtle beats and power changes with his charismatic screen presence. For every fun sequence, he builds in just enough thoughtful acting to make his shifts from vengeance driven vigilante to arrogant hero to desperate survivor easy to swallow. This film works mostly because of Ti Lung and his character.

It also should be mentioned that the final act of The Delightful Forest might be one of the more brutally violent fight sequences that Chang Cheh has put to film. Chang Cheh films have always been known for pushing the gore and violence and even making a habit of killing off whatever characters he feels will make the biggest impact. When the plot twists throws our heroic kung fu champion into the grinder, the audience doesn’t really know where it’s going to go – and it goes for broke. A one-man siege on the villain’s guard riddled house results in plenty of the red, red kroovy being spilled and an astronomical body count. So even though a good portion of the first two-thirds is dedicated to fun, by-the-numbers fight sequences and story build – the final act is a classic Chang Cheh epic throwdown if there ever was one.

My expectations for this Shaw Brothers classic might have already been high thanks to an iconic star and director, but The Delight Forest surpassed those easily. It’s a fairly straight forward plot that relies on more detailed moments and characters to work rather than broad stroke elements. That, partnered with some stellar action and great character work from Ti Lung, makes it one of my favorites from the studio…a high accolade when they produce so many great films.