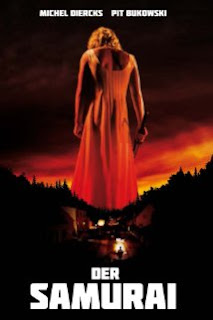 It might only be half way through the year, but we may already have our “WTF Movie of the Year” award winner. Don’t let that kind of award title frighten you though, because in the case of Der Samurai, it’s actually something of a compliment. Despite one of the most baffling plots you are likely to indulge in this year, this German horror thriller is both remarkably simple and ridiculously complex at the same time. It fills its proficient 79 minute run time with enough enigmatic imagery and atmospheric creepiness that any horror fan is going to want to experience what Der Samurai has to offer.

Jakob (Diercks) is kind of a tight ass. As only one of two police officers in a small German village, he tries very hard to make his youth and lonesome life one that doesn’t stop him from being good at what he does. When a mysterious package arrives at his door one night and a mysterious caller tells him to bring it to an abandoned house on the edge of town, his curiosity gets the better of him and he goes to deliver the package. What he finds that night will lead him on the trail of a rampaging lunatic.

There are a lot of horror films that attempt to blur the lines between the reality of the film and a sort of fantasy-like edge and sometimes they succeed (last year's The Canal, for example) but often it ends up being a bit forced. For Der Samurai, the almost subtle spiral into stranger and stranger circumstances are marked with realistic elements and it makes the blurring even more potent. Director Till Kleinert is so proficient at creating flow and atmosphere in this movie that it becomes damn near impossible to tell if anything is supposed to be a part of Jakob’s deteriorating psyche or a real obstacle he most overcome. Whether it’s the wolf in the woods that kicks off the film, the semi-punk-like group of young members that oppose Jakob, or the continued almost boogeyman-like presence of our villainous cross-dressing “samurai,” the film does an admirable job at taking a very simple premise and making it dream-like without succumbing to the pretentiousness of being ‘artsy.’

To pull this off, Der Samurai requires a lot from its execution. While the director most certainly has the biggest role in pulling off such a ridiculous concept, the rest of the film has to be just as good to make sure nothing feels out of place. Michel Diercks comes off as remarkably honest and well-intentioned as Jakob; enough so that when he starts to lose his shit by the third act the audience sincerely feels for emotional progress. This, of course, is completely countered by the enigmatic and ‘hold-your-breath-cause-who-knows-what-the-fuck-he-will-do’ performance by Bukowski as the ‘samurai’ himself. Most of the secondary cast is limited to smaller bits of screen time so it’s left to these two to truly carry the film and they handily accomplish this act. These performances and the atmospheric feel of the film is punctuated with some strangely effective (very) dark humor too—enough to just break the tension a little bit so that the film isn’t utterly suffocating at times. So certainly keep that in mind.

With strange erotic undertones, a handful of impressive gore pieces (I’ve never seen a decapitation with fireworks before, so that’s a plus), and enough atmospheric tension and intrigue to smother most horror newbies, Der Samurai is the kind of film that seems simple on the surface level, but has enough emotion and pressure seething underneath that it haunts the viewer for weeks after it’s done. With a synopsis that had me scratching my head, my expectations were a bit scattered. Der Samurai annihilated those expectations with its expert executions and thoughtful concept. It’s a strange film, but it is also quite fulfilling as an artful horror experience.

If you so want to experience the Der Samurai film, feel free to click the link below.