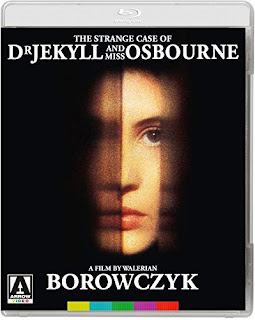 “This is war. It is like war. A solider fires, the good Lord carries the bullets.”

Going into a film blind can be an adventure in itself. While the director of The Strange Case of Dr. Jekyll and Miss Osbourne was more or less known for his work in the French erotic film industry of the 70s and not for horror, I attempted to go into this cult film with an open mind. There had to be a reason that Arrow Video went to extensive lengths with their original negative scanning for this latest release. The Strange Case of Dr. Jekyll and Miss Osbourne (which I will refer to as Jekyll from here on out because I worry about the finger fatigue that repeatedly typing the full title will bring on) is a film that takes a rather dream like approach to the simplistic spin on the classic tale of dual identity and the blend of artistic moments and the exploitative horror is impressive to say the least.

It’s the celebratory dinner for the engagement of Dr. Jekyll (Kier) and Miss Osbourne (Pierro), a couple very much in love and ready for the next step of their lives and all of the big guests are invited. Scientific colleagues, a priest, a general, it’s going to be a small, but grand affair. That is until an unexpected guest going by the name of Mr. Hyde (Zalcberg) shows up – and the body count starts to rise.


Based on the basic synopsis of the film, one could very well make the assumption that Jekyll is a straight up slasher film. It certainly has all the right ingredients to be of the slasher genre: plentiful and creative kills, a confined and isolated setting, nudity/sexual elements, and a unique and memorable killer. In many ways, Jekyll is the kind of film that really boils itself down to being a Mr. Hyde itself with a script that includes barbaric and abrasive animal like elements that borderline the exploitation tag. They even throw in poison tipped arrows that will obviously be used for at least one death sequence later down the line, it’s that slasher-ish. This is partnered with a rather erotic streak for the movie that’s manifested by Mr. Hyde using sexual acts to kill a handful of his victims.

If the film can be compared to the classic duality of the titular hero/villain and its horror elements are akin to Hyde, then it’s not fully unreasonable that there would be an honest and well intentioned aspect of the film that would represent the good doctor. It’s this part of Jekyll that makes the film work so well. Even if the film is often abrasive with its horror pieces and shocking with its sexual violence, there is an artistic merit to the film that cannot be ignored. Jekyll plays out almost like a dream, both in its strangely vague plotting and in Borowczyk’s visual approach to the film. The lighting and lenses used to shoot the film give it a hazy and soft look (thanks to a stunning new restored high definition presentation it works twice as well), the score is a pulsating electronic mist that gets under the skin, and the film takes some more cliché moments one would expect (like the transformation of Udo Kier’s Jekyll into Zalcberg’s sinister Hyde) and gives it an astounding artful grace. A legitimately strong cast helps in this endeavor, including an intense acting performance from Magee as the General, but our three leads really drive the film forward and add another layer of elegance to what might have been a fairly straight forward grindhouse affair.

While The Strange Case of Dr. Jekyll and Miss Osbourne is not an easy film to consume with a first act that tends to drag a bit and a case of some irritating plot holes (why isn’t anyone really trying to get outside help?), the resulting mix of artistic execution and horrific foundations make for a truly unique film experience. I’ve seen a ton of adaptions of this classic tale, but none of them affected me quite like this one did. Perhaps it was going into the film blind, but Jekyll is a wild ride for a horror film and quite deserving of its cult standing – and the utterly beautiful new release.

Pick up one of the best best restorations of the year for one of the biggest cult films of all time at the link below!