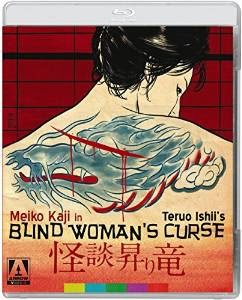 Blood Brothers has always dedicated our coverage to the likes of cult film, but we have yet to cover a film by The King of Cult himself, Teruo Ishii. It was only a matter of time before we did and thanks to the most recent Arrow Video Blu Ray release of Blind Woman’s Curse, that’s the film that is going to get us into a whole new territory…a realm of nonsense. Blind Woman’s Curse is a film that is utterly uneven, strange, and quite often mind boggling in its juggling genres and style – but there is certainly a charm to its unusual aspects that make it such a cult favorite. This is not a film for those looking for some serious foreign cinema, but it certainly lives up to its cult standing as one of the more unusual yakuza films in my collection.

After a duel between Yakuza clan leaders leaves a young woman blind by accident, she vows vengeance against the leader of the rival Tachibana clan Akemi (Meiko Kaji). Five years later, the Tachibana clan is finding itself on the brink of war against a rival outfit and the thoughtful and restrained leadership of Akemi is being challenged. When Akemi starts to find a series of dead yakuza members, including her own entourage of women with their dragon tattoos removed, she finds that the past has come home to haunt her.

You know when the director makes a statement that says: “As far as being coherent, I feel the movie was nonsensical” then you’re in for a wild ride. Blind Woman’s Curse is a roller coaster of style. Whether it’s the core yakuza clan plot that drives most of the film, the occasional bits that feature a cursed cat running amok, or the horror streaks derived from a hunchback with a strange penchant for dancing, licking, and dressing up as corpses, the film whips around at rather break neck speeds. It’s relatively unpredictable to even the most seasoned film fanatic. It’s hinged on the rather uniquely empathetic performances of Meiko Kaji and her blind rival which bring a thoughtfulness and humanity to a whirlwind of WTF – where villains range from hunchbacks to loin cloth wearing thugs. It’s a strange balance where everything is taken seriously, not matter how out of the blue it might seem.

The new high definition digital transfer does bring out the best of Blind Woman’s Curse… that just so happens to be the visual flair of The King of Cult. Throughout the entire film, Ishii slathers every scene in lavish tone and thoughtful visual depth. Whether it’s a camera shot looking up at a character through haphazardly spaced floorboards or his effective use of mirrors to create dynamics, each scene feels like it’s intentional in its craftsmanship. This in particular goes for the finale, which careens from a gory sword battle to an atmospheric and ghostly duel with our two rivals. If anything, Blind Woman’s Curse is the kind of film where it isn’t necessarily style over substance, but where the style is the substance.

Blind Woman’s Curse might be a film that confuses with its patchy script and wicked fast tone changes, but it’s also a film that remains remarkably memorable and unique for those exact same elements. Without the stylistically painted visuals, strong and dedicated performances, and the jarring genre shifts, this film might have just been another yakuza flick based on its core idea. It’s a strange film for sure, but the King of Cult delivers a film destined to retain its cult status here.

If you would like to order Blind Woman's Curse, below is a link to its Amazon page so you can enjoy the nonsense too.