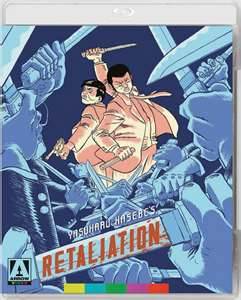 It’s movies like Retaliation that make me sad about the state of appreciation for the yakuza genre of the past. I’m not saying that Retaliation is a poor film that’s poorly appreciated. In fact, I’m saying quite the opposite. It’s powerful. What I am saying is that there are so many great Japanese gangster films that exist that will probably never see the light of day in many western countries. Thanks to Arrow Video though, we get at least one of the many overlooked classics. Hasebe’s Retaliation is an impactful, cut-throat, and efficient tale about both the dark and bright sides of life as a moral yakuza gangster and this restored and packed limited release of the film does it as much justice as the film does for the underground brilliance of the genre.

Jiro (Kobayashi) is fresh out of the slammer. Eight years away from his life as a yakuza has allowed him some introspection, but the collapse of his adopted family by a much larger yakuza gang seems to have left him with little choice for his future. He’s tasked with his new bosses to take a handful of men and manipulate two smaller clans against one another so that they can move in and purchase some land for a massive corporate deal. Things might get bloody, but how far can he sacrifice his own morals before he has to retaliate?

Almost ten years before John Woo would popularize the ‘heroic bloodshed’ concept of gangster movies in A Better Tomorrow, Hasebe uses almost the exact same formula for Retaliation to deliver a heartfelt film full of colorful characters, loyalty, and brotherhood. While his previous film Massacre Gun utilized an atmospheric and noir-inspired touch, Retaliation makes no such attempts or spins on its story about men trapped in a vicious cycle of death and power…and their eventual rebellion against it. Retaliation is fairly cut and dry, taking its plot heavy devices and injecting the deep character reactions and artistic touches into a somewhat formulaic approach. There are twists and turns in the plot (manipulation is key to much of the tension and character beats of the film), but the film never aims to ‘surprise’ the audience with them. Instead, it takes each corner as a point to ‘surprise’ the characters and it makes each moment much more impactful. It’s decently predictable about what characters might perish or who might betray who, but the audience is still undeniably hooked in how Jiro or his team might respond to each challenge. This is impressive execution through and through to pull it off.


Since the script itself tends to be fairly straightforward in its delivery, it’s up to Hasebe and his own team to make Retaliation as impactful as it is. While the cult director would eventually see more success in films of more extreme nature later in his career, in this film it’s all about the small aspects of his visuals and sound. Fight sequences with creative lighting (a chase sequence through a house with a flashlight highlighting the prey, for example) or a breathless death duel that’s punctuated in slow motion with the ringing of dripping water makes many of these predictable twists in the plot so damn effective. This, of course, is partnered with some phenomenal performances that resonate with these artistic flourishes. Our anti-heroic trio of Akira, Kobayashi, Hideaki Nitani, and Jo Shishido carry even the most limited of screen time, but even most of the extensive secondary cast impress. If anything, I desperately wanted the film to have 30 or 40 minutes more to deepen the character chemistry for much of Jiro’s team. Not that it stops Jo Shishido and Akira Kobayashi from having one of the most fascinating on screen bromances I have ever seen on film, but it’s one of the few setbacks of the film as it feels like it rushes many of the enthralling relationships to keep the plot moving.

Needless to say, if you are a fan of gangster films or just insanely well executed action thrillers, then you need to immediately purchase the limited print of this Retaliation release. The film could have used a bit more time to enhance some of the more specific secondary characters, but it does some very impressive things with its formulaic plot. It’s populated with captivating performances, artistic flourishes, and some brutally effective violence that resonates long after the film has ended. To bring it back full circle, it’s impressive films like Retaliation that make me wonder just what other classic yakuza films are floating out there that most western audiences will never see…and never appreciate for their underground brilliance. Let’s just hope that Arrow Video digs up more of these undiscovered gems.

If you're one that wants to enjoy Retaliation, feel free to order your limited copy at the link below.