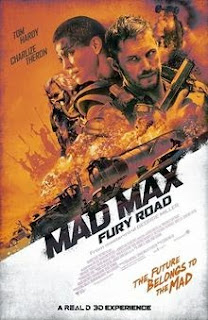 At this point in my life, I have seen a lot of insane movies. Some of them for the better, some of them for the worse. I also grew up with Mad Max in my life. The original trilogy of films was a regular rotation of my childhood (with particular note to The Road Warrior which my brother and I spent many hours consuming) and the long gestating fourth entry was becoming something of a fairy tale with the various delays and rumors that spread. Now that Mad Max: Fury Road is in theaters, more so as a reboot or unique entry to the franchise than some sort of true sequel, it’s hard to say that I am sorry it took so long to come out. Writer/director George Miller returns to the franchise that put his career on the map with a fury, not only proceeding to craft one of the most insane action films of the last two decades but fuel injecting it with such a subtle soul and thoughtfulness that it sticks with the viewer long after the chaos burns out.

Max (Hardy) is in a bad place. After being caught be some scavengers, he’s locked up to be used as a blood transplant “volunteer” for the War Boys. Luckily, one of the main warriors for the tribe Furiosa (Theron) has decided to betray her lord Immortan Joe (Keays-Byrne) and takes his wives in a pimped out war truck to a promised “green place.” Max finds his way onto the caravan taking the women away from their imprisonment and together with Furiosa will have to outrun Immortan Joe and his convoy of death.

Like the films before it, Fury Road can easily exist on its own merit – and highly embraces the fact that like James Bond it is more or less another tale of the road warrior and not shackled to previous entries. The film even goes as far as not explaining a lot of things. The connection between three massive and violent tribes, Max’s own frightening flashbacks, and the events that lead Furiosa to take the wives. It doesn’t affect the film’s own narrative though and allows the audience to insert their own imagination into it. Even though the film is introduced by Max’s narration about his fragile mental state, Fury Road rarely spends the time to give exposition. Like the survivors of the wasteland of the film, the audience is left to fend for themselves, consuming the little scraps of plot and characters thrown to us, and relying on our own wits to survive the insanity of this film. And this film is insane. George Miller, like previous entries to the series, paints the film like a work of art. He relies more on visual storytelling and blurbs of monosyllabic dialogue than a full “script” to form this film. It’s whole-heartedly refreshing to not be treated like idiots in an action movie intent to explain everything in case we don’t get it. You may think to yourself at one point that you don’t understand why the film’s villain has a vehicle in his convoy that includes a flame throwing guitarist, but never does it feel out of place. Fury Road makes sense out of the senseless and sane out of the insane. Even if you aren’t willing to read into the small bits of character work, the tidbits of social criticism, and nuances of universe building, you can always enjoy the shit that goes boom.

For all of the strong narration that Miller builds into Fury Road, he reclaims his throne as the Godfather of the Modern Action Film with this movie. Instead of animated CGI sequences of action (sorry, comic book movies) he creates reality with real stunts, real explosions, and real danger. He creates a frantic kinetic energy with pacing and well executed set pieces instead of editing. He makes a two hour chase film feel like ten minutes without ever feeling repetitious even though a massive portion of the film takes place in or around one vehicle. The action is relentless and all of it is jaw dropping in execution. The blend of old school foundations with the modernity of technology and a budget to execute it is of the highest order here and both mainstream action fans and those with a more discerning taste are going to love what Fury Road has to offer.

Even with its outstanding story telling features and insane action, the true ace in the sleeve of this film is the cast. On the surface, both Charlize Theron and Tom Hardy seem to be solid casting choices for their looks and more importantly their aura to add to the barren wastelands of the film’s premise, but what they actually bring to the table is what I mentioned in the opening paragraph: soul. Miller has a visual mindset to sell his story and his action, but what he accomplishes with the cast gives this film that universal and lasting effect. The film is dirty, rough, and often abrasive in its outlandish elements…but like the titular anti-hero Mad Max, it’s easily full of hope, redemption, and humanity. These are not pieces inherent to the characters or dialogue, but are brought to light by the performances. In a surprise twist, Nicholas Hoult comes in to steal a good portion of the film with the biggest character arc for what could have been a throw away character and the results are as inspirational as one could hope.

If anything, Mad Max: Fury Road is a film that truly takes the art of B-grade action movie aesthetics and themes, whips them together with a massive summer blockbuster budget, and unveils a thoughtfully dynamic film. It’s pure adrenaline for two hours, but the small moments…the soul of a truly inspired film…stays with you long after the excitement of the chase has worn off. George Miller had a lot of expectations to fulfill from both new audiences and longtime fans with Fury Road and he not only does it with style – but he punctuates his legacy with substance. All hail the road warrior. For it truly is a lovely day.