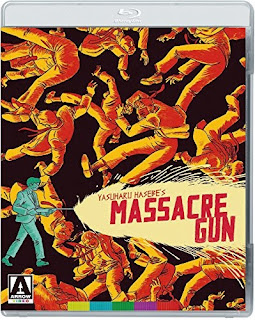 If there is anything to be said about Arrow Video making its way to US shores, it’s that it will be introducing some delightful rare treats to a whole set of new eyes. Among those is the rather rare work of director Yasuharu Hasebe. While he was predominately known for his later work in the ‘violent pink’ genre that garnered just as much ire as it did acclaim in the world of genre films, Arrow Video deemed it fit to bring over one of his earlier yakuza films, Massacre Gun, beautifully restored for the first time on Blu Ray. Now most US residents are at least somewhat familiar with the film noir style popularized by gangster and detective films of the 40s and 50s. However, Japan had its fair share of success with the style for a brief stint and films like Massacre Gun are the pinnacle of what they had to offer. It’s drenched in atmosphere with plenty of torn characters, bluesy tones, and bursts of violence to make it a true underground gem.

Kuroda (Shishido) is assigned by his yakuza boss to execute his lover. After the fact, a state of apathy towards his position in life is fueled into rebellion by his brash brothers and the three of them look to start an all-out war with the gangsters. Those caught in the way may not survive their vengeance.

If there is any one word to really describe Massacre Gun, I would be tempted to say it’s ‘efficient.’ The film is subtle in its world building with the three brothers and their various plots within the larger confines of the yakuza war that is escalating, but running at a sparse 89 minutes Massacre Gun is all about keeping the plot, dialogue, and action cut and dry on the base level. Rarely does the plot over-complicate itself with needless side characters or subplots that are left hanging by the end of the movie and it’s this sort of simplicity that allows director Hasebe and his impressive cast to build a lot of nuance into the film. The twists of the film are simple (and often time fairly predictable), but it’s the execution of these beats that makes it so effective.

If there were a second word for Massacre Gun, I would follow up that first one with ‘melancholic.’ Despite the fact that there are bursts of violence in the movie, particularly in the explosive and violent third act with its western inspired showdown on an unfinished highway complete with barrels and blowing debris, the film remains well grounded in an atmospheric forlorn state of regret for ghosts of the past. The film is driven by the oldest brother of the trio played with a heavy sadness by Jo Shishido who just happens to own a smoky blues and jazz bar that remains one of the major sets for the film. While he is countered by one hot tempered brother who lives in the moment (manically portrayed by Tatsuya Fuji) and an aspiring and decently naïve boxer (Jiro Okazaki), the film retains a sort of suffocating atmosphere of missed opportunities and a future that’s as grey as possible in a film crafted in gorgeous monochrome. In a shockingly artistic way, the three brothers represent the past, present, and future and it makes for some very unique character interactions to build the atmosphere. All of this is hammered home by a stunning score of blues and jazz music that’s perfectly set to punctuate the feeling of any particular scene whether it’s an almost dialogue free assassination scene to kick off the film or the eerily empty scoreless sound of the final shootout.

Granted, Massacre Gun isn’t the kind of film for everyone. It’s slower pace for the first two-thirds might seem a bit too slow for a lot of modern audiences and there is a sort of overzealous dramatic flair to some of the characters that might seem a bit cheesy to those not necessarily familiar with the film noir genre or its various off shoots. However, if you are a cinephile looking for a film caked in atmosphere with plenty of gangster warfare and deep thoughtful characters then look no further than this long missed Hasebe classic.

You need Massacre Gun in your collection. Immediately. Rectify this by picking up one of the limited amount of copies at the link below.