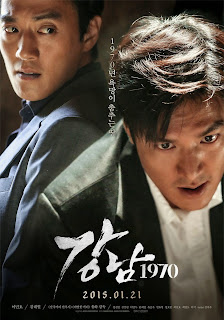 Gangnam Blues (aka Gangnam 1970) is my favorite film of 2015, thus far. Renown Korean director, Yoo Ha, who did two of SK's best films to offer, A Dirty Carnival and A Frozen Flower, returns to his Dirty Carnival gangster roots which put him on the map back in internationally back in 2006. 2011's The Howling, a weird flick that doesn't quite work starring Song Kang-ho, left me wondering where Yoo would go next and all I will say is I am glad he returned to make one more gangster film.

Gangnam Blues tells the story of Jong-dae (Lee Min-ho), and Yong-ki (Kim Rae-won), two orphan brothers who spend their days homeless, picking up trash around the neighborhood and making change to scrape by their daily lives. All of this is changed, of course, when the shack they are camping out in is being demolished one morning whilst they are sleeping inside. Rushing out to try and stop the people responsible, we quickly realize the ones at the helm of demolition are some suited gangsters. After a quick, and failed fight, we see the brothers quickly find themselves spiraling down into the world of gangsters.

I, in typical fashion, don't wish to speak too much on the details of plot and what leads to where of the film, as I find the journey to be the experience. I left out some details above, but without spoiling anything, this film is essentially just a tale of two brothers rising to power in their gangs. It sounds semi typical, and it may be, but the execution of the film is top-notch and may work better as a whole than A Dirty Carnival did, though that is hard to say (as they are pretty different).

The cinematography in this film is a thing of beauty. My only real complaint with it visually is sometimes the image looks a bit soft from the natural lighting in certain sequences, but overall it's a real looker.

Another thing to address is the film is very violent. I think it fits with the story and tone of the film, but reading through some other peoples' two cents on the matter, it was a turn off to quite a few. I think it if is meant to be, then it's meant to be and in this movie it's there for a reason. If sex and violence are no good for you though, than I may suggest not seeing the movie. I think it is amazing, and near perfect, but has a lot of both content scattered throughout.


This is also, hands down, the best role Lee Min-ho has taken on in his career. For those who don't know Lee Min-ho, he is ridiculously HUGE in South Korea and a heartthrob to women (and men) all over the world. He has a massive following internationally due to being is some television series like Boys Over Flowers and more recently City Hunter, which put him on full-on idol status. That being said, I still wish to see him as an actor and playing the role he is given. Lee Min-ho is definitely not a man of the gangster underworld in real life, but he sells it here phenomenally. I believed him as Jong-dae, and found myself not ever really thinking of him as Lee Min-ho (outside of an annoying shot of him on a motorcycle, where the frame rate changes to put the film into slow-motion for a brief moment, which wasn't his fault).

Kim Rae-won does an outstanding job as Yong-ki, and seeing him slowly become crazy whilst retaining his love for his brother, is pretty exciting and believable. I keep using the word, but that to me is what was going to make or break this film... do I believe in Lee and the characters around him, and I 100% did.

One last shout-out to the cast of the film, and in particular, Jung Jin-young as the fatherly Kang Gil-soo. It's not a big stand-out performance or role, but their is a naturalness to Jung throughout this film that makes his character memorable, and his loyalty to his boys and his character arc in the film (albeit a small one) is great.

I could go on for several more paragraphs praising the film. It truly is one of the best Korean movies of the decade, and is definitely my favorite film of 2015 so far. It's familiar, and been done before, but it hasn't been executed so masterfully in quite sometime. It's odd to praise a film that doesn't have the most original plot going for it (despite a 70s setting in a early era Gangnam), but it deserves it. It's a masterclass of a gangster film. It feels epic. The finale of this film is one of the best scenes I've watched in any gangster film... ever! It's quite a feat, and if director Yoo Ha is back to this quality of storytelling and directing, I don't think I have any problems blindly following him where he goes next.