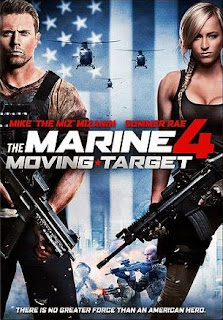 If you would have told me that 2006’s The Marine, an obvious attempt by WWE films to kick start the film career of John Cena, would have three sequels under its moniker, I would have slapped you. One sequel perhaps, maybe even two follow ups if it was lucky, but three? Get the fuck out, you crazy son of a bitch. Yet here I am, sitting down to review The Marine 4: Moving Target. Not only is it the third sequel to an original that wasn’t worthy of a franchise, but it’s one, if not the, best of the series. Well, you crazy son of a bitch, feel free to slap me instead because I’m starting to think I’m the one that needs to get the fuck out.

Jake Carter (Mike “The Miz” Mizanin) has finally found a job after returning from the military and fighting off some baddies in The Marine 3. It’s his first day as an armed bodyguard for a private military group and his first assignment is to work with a team that’s bringing in a young woman (Melissa Roxburgh) who is blowing the whistle on some big name military contractor. Like most films of this ilk, it’s going to be the first day from hell when a vicious group of mercenaries are sent to kill her.

For The Marine 4, we’re not going to be getting into discussions about the high art of character work or the twisty plot that keeps you guessing. What we are going to be discussing is good old fashioned low budget action clichés and the fun that is to be had with them. After kicking off with some nostalgic early 00s cheese in some opening credits of fuzzy pictures, shots from The Marine 3, and an industrial rock track with a crooning chorus, The Marine 4 wastes no time getting us where we need to go. If one thing can be said about this movie in definite terms, it’s efficient. Instead of continuing the theme of this franchise by having the Die Hard formula of “right guy in the wrong place at the wrong time” that the previous entries used, The Marine 4 substitutes it for a sort of Rambo inspired “right guy in the wrong place at the wrong time while killing people in the forest.” The subtitle Moving Target is aptly used here as the film maneuvers along as a chase film instead of having the hero taking on baddies who have holed up in some sort of building/fortress/boat/dock/whatever. This allows the movie to use that efficient narrative to its favor and keep things moving at a brisk pace. Whether it’s a police station shootout, a car ambush shootout, a safe house shootout, or a forest shootout, the film at least keeps the setting moving. Even if it’s mostly shootouts.


Now this is where The Marine 4 truly gets interesting. Similar to what The Marine 2 did, it takes its formulaic approach, understands that it’s formulaic, and executes it to the highest capacity that a film like this could be within said formula. At times the film even injects a bit of humor in how cliché it can be. Our hero and the leading lady have a pissing contest about reading each other’s backstory that serves as a rather fun way to get some character work and exposition into the film while indicating to the audience – yeah, we know its cliché but have fun with it. We’re not talking about great characters here, in fact the main girl can be horrendously annoying as the “outsider who doesn’t give a shit,” but it works for what it is and the film runs with it. If only they had really punctuated Blacker as the villain Vogel a bit better, then it would have even gone further.

As for the action, director William Kaufman tends to be a bit too modern in his editing and scene transitions (oh, those dreaded quick zoom and blurry camera moves get very agitating by the end) but he doesn’t use it to the extent that it becomes an unwatchable mess. In fact, most of the shootouts are remarkably fun and well-paced so that they don’t seem repetitive and the final hand to hand fight of the film is effectively planned out – even if he dispatches one of the more interesting henchwomen Dawes (played by a WWE Diva I guess and worthy of the cover art) far too quickly. It’s not perfect, but it’s better than what many theatrically released action films (I’m looking at you Taken 3) seem to be capable of.

While The Marine 4 is not a film that’s going to earn accolades for any aspect of its execution, it is a remarkably effective and fun film for action fans looking to burn a couple hours. Similar to what happened with The Marine 2, this entry comes off as a rather shockingly well intentioned film to a series that is not deserving of even this kind of quality. If the rest of this franchise continues to entertain and present fun action films like this, I have no problems with purchasing and watching parts 5, 6, 7, and 8.