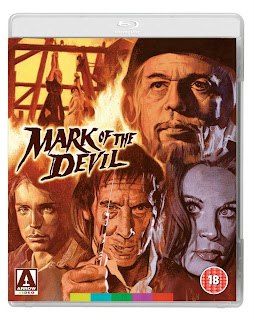 Often times the media can hype things up too much. Even decades down the road, there is an aura around Mark of the Devil that radiates a truly grindhouse and exploitative feel for the film. When it was released, it was marketed as a film that needed barf bags and a steel trap mindset to withstand the horrific violence. By today’s standards, most of the material you are going to see is pretty standard horror affair – it just so happened to be 40 years ahead of the curve. What isn’t clearly stated about Mark of the Devil is how remarkably effective it is at its intent – horrifying an audience with tension and circumstance. There is enough torture and gore to make the soft stomached turn a bit, sure, but Mark of the Devil is substantially more than that too.

For Count Christian von Meruh (Udo Kier), his trip to a small village in Europe to set up the arrival of the head witch hunter Lord Cumberland (Lom) is going to be a new experience. On one side, he has the malicious Albino (Naldar) whose obvious abuse of power as the local witch hunter is going to lash back on church. On the other side, he has the beautiful Vanessa (Katarina) who has smitten him and finds herself at the wrong end of an accusatory finger. Can he save her in time or will paranoia and corruption be the end of both of them?

Strangely enough, upon my first viewing of Mark of the Devil, I found the film to be rather…sensible. Considering the accusations, reputation, and history of the film, the expectations going into it were a bit more extreme. What greets the audience in Mark of the Devil is a film that touches on a lot of hard to stomach issues (including torture, rape, corruption of the Church, and insurmountable odds playing against our protagonists), but the core of the film is something timeless with its characters and morals. This is a film that could easily be updated, twisted, or manipulated to fit a variety of time and circumstantial plot devices. In a way, planting it in a time long, long ago acts as a sort of safety net to make sure that the film doesn’t feel too exploitative in its nature and it does the film wonders. The characters are heartfelt in their motivations (whether good or evil) and the film toys with a lot of concepts that are hard to watch, but remain impactful in their thoughtfulness at times.

However, the film does remain a bit dated when it comes to its presentation. I’m not talking about its overall look, the new Arrow Video release of the film does some remarkable things to remaster the visuals and sharpen the sound, but the film feels very 70s and it undermines a bit of its universal concept that it is attempting to convey in its narrative. Like many of the extreme films of the time, Mark of the Devil suffers from sudden shifts in tone and many of its elements are painted in with heavy handed strokes. The romantic subplot is pummeled down with a bombastically optimistic sounding score and enough teary eyed moments that Nicolas Sparks would be a bit put off and some of the torture sequences are elongated for effect…but they keep going long after the effect has hit home. This makes some of the more subtle pieces of the film, including a nice plot line about a young man who must give all of the land he inherited to the Church or be tortured as a conspirator with the devil, feel weak in comparison to the more extreme sequences.

Much of the film is driven by some impressive acting performances throughout. Even with some of the obvious dubbing and sound effects work (which might have been made more apparent by the work of Arrow Video for the release), Udo Kier drives the film home as a wholly relatable protagonist surrounded by questionable villains. Reggie Naldar ably portrays the evils of the circumstance and era with such relative ease, it’s hard to see him play anything but a villain in films that haven’t made it into my viewing queue. And let’s not forget Olivera Katarina, who despite an obvious attempt by the film makers to make as lustful as possible with her cleavage and batting eyes, actually plays the role with remarkable depth. A task that is much harder then it probably seems on the surface.

Mark of the Devil is the kind of film that earned a reputation for being extreme, but time has whittled away. The torture can be a bit much and there are plenty of hot, controversial topics in its narrative for people to bitch and complain about, but the rest is actually a well layered and thoughtful story about a man and woman trying desperately to convey common sense in a world where the systems are meant to trample it. If viewers are willing to overlook some of its dated execution and exploitative elements, there is quite an effective film in Mark of the Devil. It’s quite easy to see why Arrow Video chose this one for restoration and release.

Feel like Mark of the Devil is for you? You can purchase it at the link below from our friends at Arrow Video!
Posted by DarkReif
Email ThisBlogThis!Share to TwitterShare to FacebookShare to Pinterest
Labels: Arrow Video, Drama, Horror