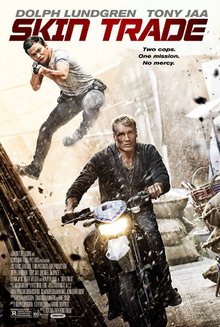 With the advent of VOD and digital movie services, the term ‘straight to home video’ rarely defines something as ‘bad’ like it used to. For B-movie fans or those more interested in genre affair (and if you are at this site, that’s probably you) then it’s something of blessing in disguise. Low budget or off-mainstream films can suddenly get wide releases for decently cheap without having fans or curious audiences purchase the film. This also allows these same kinds of films to achieve more – without sacrificing their intentions. Take Skin Trade as a prime example. This is a film most definitely catered to the ‘old school’ action audience that blends styles of action into a highly entertaining film…that occasionally touches on a more dramatic tone. The mix doesn’t always work, but it’s much more proficient then one would expect this kind of film to be at it.

Nick (Dolph Lundgren) is on the trail of some vicious Russian sex traffickers in New Jersey. When he leads a team to seize a botched shipment, he kills the son of a ruthless businessman (Ron Perlman) who takes revenge by killing his family. Now Nick must travel to Southeast Asia as a vigilante on the run from an FBI agent (Michael Jai White) and team up with a local cop (Tony Jaa).

It’s like a B-action movie daydream. Dolph Lundgren and Tony Jaa teaming up to take down a villainous businessman in the skin trade played by Ron Perlman with glorified cameos by Peter Weller and Cary-Hiroyuki Tagawa. This, of course, is truly the basis for a film like Skin Trade. The film is relentless and efficient in its pacing with the first half hour dedicated to story and the last two thirds dedicated to action and it uses all the classic tropes to various degrees of success. Both Dolph and Jaa give some of the best performances of their careers and we get shockingly well shot and choreographed fight sequences (of note: Tony Jaa vs Dolph Lundgren and Tony Jaa vs the underrated Michael Jai White) and the film sticks firm to its violent roots. Ever wanted to see Tony Jaa blast people with a shotgun or throw a man off of a roof and drop the one-liner “Negotiations are over?” Done. The film is full of old school vengeance themes and threaded through with bits of police corruption and loyalty. The performances are rather hit or miss, but action fans are going to eat this up.

As for the film outside of its genre-inspired movements…Skin Trade is a lot weaker. Director Ekachai Uekrongtham, known mostly for his theatrical work and a few documentaries, attempts for occasional artistic blips within the film. A scene where Lundgren finds a series of cage like cells filled with battered women strikes a remarkably somber tone in the middle of a fire fight and the film really attempts to drive its message about the horrors of the skin trade home at various times. Unfortunately, the efficient manner of its script and the often generic dialogue don’t help the film. The secondary characters remain hollow faces as characters (Michael Jai White, outside of one great fight sequence, is given nothing to work with for his character – which is a shame when he’s a stellar action star) and the film needed another 30 to 45 minutes of character and plot development to really make the more emotional and artistic beats hit home. As is, the film is simply predictable and rarely embraces a lot of the potentially impactful material it fringes on.

However, despite it’s obvious scripting flaws and missed opportunities to add some more dramatic meat to the film (Uekrongtham tried, so I give him credit), Skin Trade is still a fun and surprisingly well executed film. Judging from its B-action dream cast, I figured the film would end up being far more simplistic and too modern. It’s neither of those. It’s a lot of old school action tropes, blended with a bit of that Thai action flair, and then cursed by being almost too ambitious for its budget and script. It’s not nearly a perfect film, but it will definitely appease those looking for a solid action thriller for rather cheap on VOD. Plus, you know, it has awesome action things like Tony Jaa fighting Michael Jai White and Dolph Lundgren with a rocket launcher. Win/win.