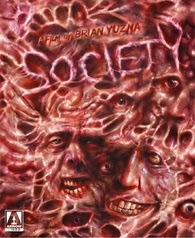 Arrow Video Special Features
* Newly remastered 2K digital transfer of the film, approved by director Brian Yuzna
* High Definition Blu-ray (1080p) and Standard Definition DVD presentation
* Original Stereo 2.0 audio (uncompressed PCM on the Blu-ray)
* Optional English SDH subtitles for the deaf and hard of hearing
* Brand new audio commentary by Yuzna
* Governor of Society - a brand new interview with Yuzna
* The Masters of the Hunt - a brand new featurette including interviews with stars Billy Warlock, Devin DeVasquez, Ben Meyerson and Tim Bartell
* The Champion of the Shunt - new featurette with FX artists Screaming Mad George, David Grasso and Nick Benson
* 2014 Q&A with Yuzna, recorded at Celluloid Screams Festival
* Brian Yuzna in conversation backstage at the Society world premiere
* 'Persecution Mania' - Screaming Mad George music video
* Limited Edition Digipak packaging featuring newly-commissioned artwork by Nick Percival
* Collector's booklet featuring new writing on the film by critic Alan Jones, illustrated with original archive stills and posters
* Society: Party Animal [Limited Edition Exclusive] - the official comic sequel to Society, reproduced in its entirety in a perfect-bound book
While there are many Brian Yuzna films that remain in my heavy rotation of film watching both as a producer (Re-Animator) and as a director (Return of the Living Dead III), for some unknown reason the film Society has consistently evaded my attention. Distinct memories of seeing its cover on the shelves of the local video store and even seeing it in my brother’s collection have always made me aware of its cult value, particularly to those of the horror fanaticism, but it never popped up on my viewing queue. Thanks to Arrow Video’s most recent (and valuable) attention to the film, Society finally made its way into my viewing rotation. While the film may not be quite as effective in its atmospheric surreal storytelling as Jacob’s Ladder or quite as disturbing with its body horror metaphors as Cronenberg’s Videodrome, Society is a vulgar auteur treat for collectors if there ever was one.

Bill Whitney (Warlock) has always felt a little out of place among his rich family and friends in Beverly Hills. Despite his popularity and chance to run for class president, something has been off lately. When a fellow friend Blanchard (Bartell) unveils a secret about ‘high society,’ Bill begins to become paranoid and the world around him begins to dissolve into a nightmarish spiral of back stabbing, secrets, set ups, and bugs.

If one is willing to overlook some of the surface level 80s-ness that slathers Society with quirky dialogue, over the top acting bits, and shoulder pads the size of small airstrips, there is a fascinating and smartly developed horror film at the core. Comparisons were already made to Jacob’s Ladder and Videodrome and they are not in vain. Society is a film filled with a permeating sense of paranoia and dread, fueled by a teenage sense of anti-establishment and rebellion. The plot itself is fairly basic with the discovery of a hidden society within our culture that homages Invasion of the Body Snatchers in a lot of ways, but takes a more 80s hip approach the matter. The characters, while many are rather cliché 80s stereotypes including the big mouth bully and the comedic misunderstood best friend, are delightful to watch in some strange ways even if some of them seem to be a bit underdeveloped – like Bill’s cheerleader girlfriend who would seem to play a much bigger role in the finale but falls off the grid.  Hardly is anything wholly original in the foundations of Society, but it’s massively entertaining nonetheless.


Much of the entertainment derives from that previously mentioned sense of dread and the film’s dedication to slowly spiral into a full on nightmare by the end. Arrow Video’s new and remastered 2K digital transfer of the film really benefits a lot of Yuzna’s wicked angle camera work and horrific visuals for the third act as it goes full blown insane with its plot. Not to give too much away about what the “society” is (not that the film full explains it either – it tends to leave it vague and even goes as far as to hint that it might all be a fever dream), but the body horror tag is not a futile attempt at giving the film something to sell itself on. Goo, body deformations, and crisp (horrific) sound effects make the final “shunting” sequence something to see for horror fans.

Society is far from a perfect film as some of its plot threads tend to be dropped for the sake of taking the film further and further down the rabbit hole as it progresses. It also happens to be much smarter than many critics and fans seem to give it credit for and the heart that the film makers and cast put into the film (which is apparent through all of the new interviews and commentary featured on this release) makes it a B-grade horror classic. This release is not only highly recommended for its quirky and shockingly thoughtful horror film, but for all of the work that Arrow put into this latest release. Fans and the curious will want to purchase this as soon as it drops.

Arrow Video's release of Society hits shelves on June 9...and it's limited to 3000 copies. So order below and become a member of the upper class!