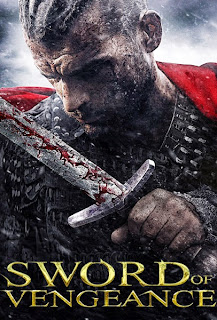 At this point, the modern sword & sandals “style” that began with Zack Snyder’s 300 is getting a bit old. There are some films that can make it work by injecting some fun into the mix (see the remake of Conan the Barbarian), but other than that it’s a style that requires a lot of substance to work. For Sword of Vengeance, a medieval film that uses this same style, there just isn’t enough depth or fun for the style to rest on. For a rainy day movie it’s certainly entertaining enough with its simplistic structure and plentiful combat, but it rarely inspires the kind of dedication from its audience to lift it into being a modern cult classic.

Under the iron fist of a terrible and vicious warlord (Roden), the people of the North live dismal lives. It’s the appearance of a striking young warrior Shadow Walker (Weber), who man handles the best of the warlords minions, that inspires them to take action. Banding together under Shadow Walker and a young woman (Wallis), these rogue fighters will stand up once and for all…but is there a secret agenda by our wandering swordsman that will undermine the entire resistance?

Taking a massive page from the likes of classic spaghetti westerns and samurai film, Sword of Vengeance builds itself on some fairly well tread tropes. The ultimately silent anti-hero who saunters into town bringing hope with him. The townsfolk standing up for themselves. A massive standoff at the end. These are the basic building blocks of probably 20% of all genre films since the 50s and 60s and this medieval slash and crasher sticks to it…to a fault. While the film rides on some decent performances from Weber and Roden as the clashing ends of a familial feud, the bare bones script doesn’t inspire a lot of depth or dedication from its audience. It’s predictable and worse yet, almost boring. For an action film, you never want boring, even if it is predictable. Yet Sword of Vengeance is so remarkably formulaic it could have been basis for a 100 other films by only changing the location and names.

The lacking depth of the film hurts everything else about it. Director Jim Weedon really tries to layer on a lot of modern style to the film (with a low budget, it looks like it has some strong production values) but it’s built on a bad foundation and thus crumbles under any kind of critical scrutiny. The slow motion seems to lack the emotional punch to make it work artistically, the handheld edit happy style of the fights underscores some decent choreography, and Weedon seems to think that muted colors and grainy texture automatically mean a film is gritty. Just because it’s sepia tone for night and white washed for day does not make things gritty. It just sort of makes everything look the same here and limits what can be done visually. Partner this with a film that has maybe 4 to 5 lines of dialogue for its character building scenes and it’s a combination that simply doesn’t work.

As I mentioned, Sword of Vengeance is entertaining enough to make it worth a rental for those wanting to burn an hour and a half watching some mindless action. There are seeds of thoughtfulness in the script, style, and performances that might have blossomed into a much better film if they were planted in a much better soil, but as is the film comes off as all attempted style and little sticking substance.

If the style of this film is up your ally though, here's a link to purchase the film for its May 26th release date!