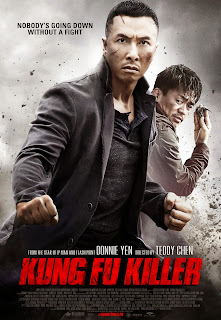 The career of Donnie Yen is something to admire, whether or not one agrees with the quality of his most recent output of films. In an era where there were few new action stars coming out of Hong Kong, he came out fists first and some decent acting chops second, taking the Chinese market by storm and earning quite the impressive world wide following. For his latest martial arts flick, Kung Fu Killer (aka Kung Fu Jungle), Yen and company homage the classic era of martial arts while taking an obvious modern spin to it. While it wasn’t perhaps the straight up throwback film it could have been, Kung Fu Killer is massively entertaining.

Hahou Mo (Donnie Yen) is a well-respected martial artist who simply went too far in a match and landed himself a five-year prison sentence. When a serial killer (Wang Baoqiang) starts picking off his old opponents and masters of certain aspects of martial arts, he gets a brief release to help out a determined police officer (Charlie Young.) Will they stop the killer in time or will Hahou Mo have to take to fighting one more time?

Kung Fu Killer has one thing that is certain to please both old school martial arts fans and new ones: heart. Director Teddy Chan has showcased himself as a director with both style and substance already and while his execution of the film here is a bit hit or miss, this is one thing he gets right. The plot itself could have easily cascaded into being a horror-angled film and the atmospheric horror moments that do pop up here and there – including the opening credits sequence, but Kung Fu Killer tends to play it more as a gimmick to its basic martial arts core though. It works. The film highlights the talents of both Donnie Yen as an empathetic hero and Wang Baoqiang as a bat shit crazy villain, whose viewpoints on martial arts conflict with one another. The latter steals most of the movie, both with more fight sequences and with a more intense character arc, but both actors carry such a screen presence that it’s hard to deny their inevitable collision course.

The film also features the impressive action direction of Donnie Yen. Even when a film doesn’t live up to its potential (see the action thriller Special ID), his fight direction is always top notch and becomes a reason to see a film alone. Kung Fu Killer resides at this junction. While Wang Baoqiang gets most of the fight sequences as he faces off against various ‘masters’ and defeats them using their own tactics, it’s the finale where hero meets villain that earns the praise. Sure the chase sequence at on the river has plenty of awesome action and the opening prison fight showcases Yen’s blend of humor injected brutality, the final street fight is down right impressive. The price of the movie is worth it for this final throwdown just in itself.

While the old school heart and strong fight work make for a film that is undeniably entertaining in the end, Kung Fu Killer does struggle a bit in trying to make the film more than just an old school kung fu homage. Teddy Chan opts for a film that leap frogs a bit in time and relies on a lot of flashbacks to recall events and details that the audience was not privy to before. The attempts at a somewhat non-linear narrative fall utterly flat though and half of the time the flashbacks are unneeded. Yes, we remember the reason our hero wears the bracelet and we don’t need a voiceover flashback. Thanks. The film also tends to rely a bit too much on CGI. In particular, there is a boat wreck that is almost laughably awkward and some of the sword work in one of the more intense fight sequences (with the ever awesome Louis Fan) doesn’t come off right. If anything, it’s these little things that undermine the entire “throwback” feel of the film and sacrifice it for a more modern spin.

Kung Fu Killer remains a mixed bag of sorts thanks to a modern spin that doesn’t necessarily work with the film’s better elements, but it is still some fun entertainment for action fans. Both Donnie Yen and Wang Baoqiang are phenomenal in the film (as are many of the secondary roles) and the fight sequences are expertly choreographed and shot – blending some of the modern stuff with classic complexity. It’s not quite the instant kung fu klassic I was hoping for in the end, but it still is going to remain a favorite of mine even with its flaws.

BONUS PRAISE: I love all of the little cameos by Hong Kong legends in the film and all of the bits and pieces of martial arts history. Lau Kar Leung and Jackie Chan show up on movie screens with some of their iconic roles and there is even a tattoo parlor littered with classic martial arts posters. It’s the little details that certainly make me want to watch the film again.