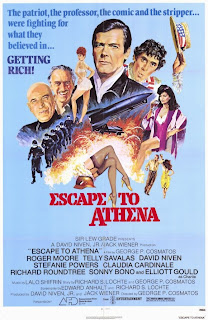 Every once in a blue moon a DVD/Blu release of a film I have been dying to see escapes my radar. One of such film was of the 1979 World War II critical and financial bomb “Escape to Athena” which was finally released on DVD back in July thanks to Hen’s Tooth Home Video but escaped me until last week. Being an avid fan of Roger Moore, Telly Savalas, World War II, 70s Cinema, and viewing anything/everything that was a box office bomb I had to make this part of my collection. Like expected it was a lesser WWII film entry but definitely not worthy of all the shit that piled on it by the public and critics back in 1979.

The plot is simple, prisoners of war on a Greek island archeological dig (over seen by Nazi Roger Moore) team up with an underground rebel resistance army to take down a covert Nazi hideout and perhaps plunder some treasure along the way – very typical of films of this genre.

I love all-star casts and the cast is superb and diverse here, including but not limited to Roger “James Bond” Moore, Telly “Kojack” Savalas, Richard “Shaft” Roundtree, David Nivan and Elliot Gould. However many of the cast members are hopelessly miscast and none-more than Roger Moore as our Nazi camp commandant. He is just wishy-washy in the role, neither threatening nor likeable. Sonny Bono’s Italian chef, Richard Roundtree’s soldier, Michael Sheard’s sergeant and Telly Savalas’ rebel resistance leader are all low brow caricatures and nothing to set them apart from other characters in the genre. Elliot Gould however shines as a civilian USO entertainer whose plane gets shot down and unwittingly ends up in the POW camp. 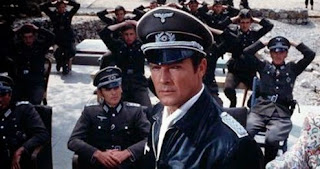 Other than conventional characters and miscasting, another problem director George P. Casmatos (“Rambo: First Blood Part II”) has is he can’t seem to make up his mind to make this comedy or action/adventure WWII yarn. It starts off slow with emphasis on comedy and later on becomes a full blown action flick with impressive sequences towards the end. But even the good action sequences are predictable and seem to copy-cat other films of the ilk. 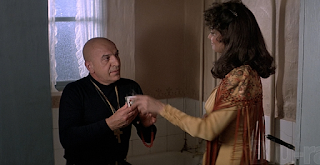 “Escape from Athena” is an offbeat war film, I will give it that, and it is well made with gutsy camera shots (shown by the opening title sequence), exotic Greek island locals and a rousing score by Lalo Schifrin but the filmmakers can’t make up their minds on the tone of the film and seem desperately to take bits and pieces of superior WWII pictures like “The Guns of Navarone”, “Kelly’s Heroes” and “The Great Escape” and mix them to no avail. Is it as bad as people made it out to be on its release? No, but it does have more than its fair share of flaws but should appease fans looking for a World War II flick that’s a little different.