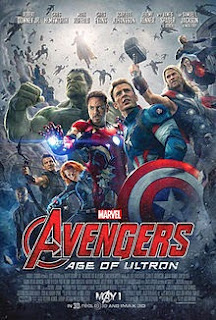 After recently watching the Daredevil series that premiered on Netflix in April, I was under a strong suspicion that Marvel couldn’t do any wrong. Just looking at Marvel’s slate of films since the box office crusher that was the first Avengers indicates a sort of massive upswing of talent and thoughtfulness of the ‘summer blockbuster.’ Marvel is simply dominating when it comes to massive spectacle with heart. Unfortunately, what goes up must ultimately come down and for their second time around with the full Avengers team, carrying the badass subtitle Age of Ultron, Marvel missteps. I’m not saying that Age of Ultron is terrible film. No. In fact, it’s still a hugely entertaining summer blockbuster full of high-octane action and enough fun to keep the Marvel train chugging along confidently. What I am saying is that it’s simply not up to par with the streak that this franchise was shooting along.

The Avengers have taken on their own initiative since the collapse of SHIELD. It has been their main goal (outside of their various side missions) to find Loki’s scepter that was hijacked by Hydra. Once discovered though, Tony Stark (Robert Downey, Jr.) and Bruce Banner (Mark Ruffalo) realize the potential of the stone in it: to create a self-sufficient artificial intelligence to act as a sort of world protector so they can go back to living their own lives. Its name is Ultron (James Spader). However, Ultron has determined that the only way to save the Earth is to protect it from its greatest enemy – the human race. Now it's up to the Avengers to assemble once more to stop Ultron from taking human extinction into his own hands.

There is a great story to be had in Age of Ultron. The concept of humanity being its own worst enemy and having to survive might be science fiction 101 at this point, but with Spader as the titular villain and the rest of the charismatic crew on board (with director Joss Whedon overseeing the entire thing) this film should have knocked it out of the ballpark. However, Age of Ultron has to settle for a bunt because it suffers from the strange fate of having both too much going on and not enough going on. Critics and audiences alike seemed to be amazed at how Whedon handled the massive cast and plot of the first Avengers, but he doesn’t fare so well here. Not that he doesn’t try, by golly he tries very hard to get it all in, but even at two and a half hours the film simply cannot fit in enough character development and plot work to get it to flow properly. Thusly, the film sort of stutters along feeling like it is setting up more future installments instead of focusing on its own narrative as a film.

Part of this issue arises from the sheer amount of characters that are needed to a) keep fans happy and b) set up new lines for future films. Age of Ultron leaves many of the main Avengers as more powerful chess pieces for the game and doesn’t move their characters forward nearly as much, but it does have the smarts to deepen the work for fan favorites Black Widow and Hawkeye. A romantic subplot between Widow and Bruce Banner works splendidly for both of their character arcs and some background for Hawkeye gives him a reason to be on the team this time around. Unfortunately, the film decides to add at least 4 major players to the game – including the villain Ultron, a new android Vision, and the twins: Quicksilver and Scarlet Witch. Now I won’t give away too much of the plot here as these characters are substantial to how the film wraps itself up, but I simply have to mention that not nearly enough time is given to any of them for it to be as impactful as it should have been. Ultron is limited to simply being a Bond villain, they build up a story thread to the creation of Vision that utterly falls flat in the final act, and the twins are given some Eastern European back stories that feel like they should resonate with the audience but don’t. The film then spends so much time on getting all of these characters and plot progressions into the film that it has to simplify its main concept to: badguy wants to kill mankind, we must stop him. Really? With all of the great power struggles, debates on freedom, and corporate meddling of various villains previous, they limit Ultron to this? It’s massively disappointing.

To be honest though, despite its obvious faults in jamming so much in but leaving too much out, Age of Ultron does succeed as a piece of entertainment. The action is damn near relentless and the banter is appropriately fun with quips and sly references through and through – something that comes expected from Whedon at this point. The characters are still massively charming to watch and there are a handful of things that the film does right by them – including some fun throwback pieces of dialogue and setting up future installments. A few of the action set pieces are a bit too dark to truly see what’s happening (the first time Ultron shows up at the party, for example) and the finale does feel a bit redundant to what we saw in the first Avengers with the team battling a slew of nameless flying enemies and trying to prevent the big bad from pushing a button, but it’s still entertaining enough. The opening sequence might steal the show for the rest of the film with its massive vehicular destruction and twisting camera shots. It leaves one wondering why this wasn’t the finale, but I digress.

In the end though, The Avengers: Age of Ultron finds itself feeling like one of the weaker Marvel Cinematic Universe entries. It can’t find its flow and the massive amount of new material tends to fall apart as it plays its desperate juggling act. It’s still entertaining, if you like watching vehicles flip, things go boom, and more than enough flying things to shake a stick at – but compared to what the MCU has accomplished thus far, it’s hard to say it lives up to the standards. While Ant-Man this summer lends itself to simplifying the MCU a bit (after this it needs it), I’m somewhat worried about the complexity of Captain America: Civil War only taking up one film considering how Age of Ultron tries to do far too much.