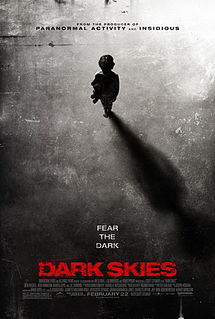 In the last handful of years, horror has taken flight to become something of an underdog champion for theatrical releases. At the head of that charge sits a company that has made a complete market for supernatural horror films called Blumhouse. Blumhouse produces smaller budget horror films which have made a shit ton of money in the theatrical scheme from the likes of "Paranormal Activity," "Sinister," and "Insidious." For one of their most recent stakes on the genre, they decided to add a bit of science fiction to the mix with "Dark Skies." Now the film is far from original and it certainly follows the Blumhouse formula to a very predictable fashion when it comes to plot, but "Dark Skies" does happen to have an ace up the sleeve...the film has super strong atmosphere and execution. An element that definitely lifts it from being as cliche as it could have been.

A young family has been struggling with the recent economic crash. Their lives are in a shift and the adjustment has been less than easy. That's the least of their worries though as weird things start to happen in their house. There are losses of time and little things are happening around the house that have them worried...and when they start to research to the 'why' of all of these events they find that they might have been marked for visitation by beings not of this world.

For those of a more discerning taste, "Dark Skies" is going to come off a relatively hum drum affair. When I said that it follows the Blumhouse formula I truly mean that it follows the formula to a damn 'T.' A family discovers weird happenings (including some stacked house hold items that is obviously pulled from "Poltergeist") that eventually culminates into harsher and harsher occurrences before it all explodes in an over the top finale where we are supposed to be scared shitless. Weird, I'm pretty sure that I've seen this movie before as every Blumhouse production. "Dark Skies" literally goes through the motions of its script in the most predictable ways so that even the twist at the end seems like uninspired drivel. Even when the film does something interesting with the character development, like adding in the child protective services subplot, it rarely does anything with it which comes off as disappointing.

While the script and its general generic approaches does come off as just another mainstream horror film disappointment, it's hard not to be rather impressed with what execution "Dark Skies" accomplishes. While I was always impressed with Scott Stewart's previous directorial style (he did the intriguing and off beat "Legion" and the action packed "Priest"), his toned down and atmospheric style here is completely different then what he has done previously and it was perhaps the biggest, and most pleasant, surprise of all. He really focuses down on the familial dynamics and gives the actors some strong moments to which they fully embrace with effort rarely seen in a film like this. He even throws in a few curve balls of stylistic choice in the finale to make sure that our visitors remain somewhat in the dark. Partnered with strong performances and a knack to get some creepy moments out of relatively little, "Dark Skies" comes off as a much better film then it should have any right to be.

While "Dark Skies" didn't necessarily sell me due to a lacking script and some mixed plot failures, I did find the film overly enjoyable simply due to Stewart's strong sense of atmosphere and some very strong performances from our lead actors including another strong role for Keri Russell. The scares might not have been all that scary, nor were they original, but the film was able to kick them through with enough vigor to make them feel more disturbing then truly scary, which is the strength of this film. For the hardcore horror fans, "Dark Skies" will come off as just 'another' mainstream horror film that fails to reach for the stars. For those looking for a decent rental for a fun movie night, then "Dark Skies" hits the right buttons.