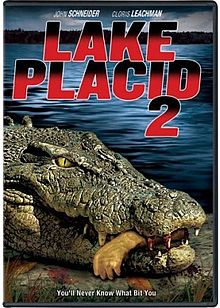 After revisiting the first "Lake Placid" with its fun and goofy take on the killer croc genre, it was only necessary that I continue on with the franchise for the third film in my "Croc Of Sh!t: Killer Croc/Gator Marathon." By necessary, I sure mean necessary because I sure as hell wouldn't know why anyone would ever want to watch a piece of shit film like "Lake Placid 2." This film was simply awful. The plot was essentially rehashed from the first film, the characters are all paper thin excuses for human beings, the scares are forced, and the special effects are utter bottom of the barrell SyFy material. Yes, in fact, "Lake Placid 2" is a SyFy channel film. That's okay though. I have the 'unrated' version...which essentially means more nudity and more stupidity.

For new town sheriff Riley (Schneider), his visiting son is the least of his worries when a man is found dead apparently eaten. This leads a Fish And Wildlife officer Emma (LaFleur) to come and investigate and the results seem to indicate that there is a giant crocodile once again living in the region and its hungry for people.

I would give you more of a synopsis than the brief one above, but it would probably prevent you from reading the rest of this review. Essentially, we have another killer croc (maybe more!) that's come back to Maine to kill more people. We are lead to believe that this is the same town/lake from the first film - not that I remember it actually saying that maybe it does or doesn't, I just assume because it has a character that happens to be the sister of Betty White's character from the first film doing crazy shit - and everyone has already forgotten about the incidents from before. Which is a stretch to start with, logistically speaking. The plot then essentially retreads the first film as they investigate the incident and ultimately decide they need to catch the croc themselves with the help of another 'croc hunting expert' this time in the form of a horribly acted and over the top big game poacher who flies in on the worst CGI sea plane I've ever seen. The plot is simply by the book uninspired crap that rarely makes sense beyond its predictable beats. What new elements they do add in, including a crocodile nest and the added terror of genetically altered crocs that have been fed government reject meat, are silly and add nothing to the actual film.

"Lake Placid 2" then decides to take this obviously patched script and build horrible executions on top of it. The acting is atrocious, the direction is basic cable crap, and the special effects are "Sliders" era 90s grade bad. I mean, the crocodiles look like something that would have been a rejected concept for a Playstation One "Crash Bandicoot" game and the 'exciting' moments are utterly ruined by the effects. It's not scary when a jerky CGI croc suddenly appears and someone gives a silly yelp. Not at all. I didn't care for the people to begin with - including our trashy teen characters caught hiking in the woods with all of their terrible dialogue - and I ended up rooting for our poorly animated crocs to kill these bastards before I tore my own eyes out.

There was a reason I originally titled this series "Croc Of Sh!t Marathon" and "Lake Placid 2" exemplifies that title with the greatest of ease. This film is awful from the first second to the last frame and I highly recommend that no one watches this...ever. Like...ever.