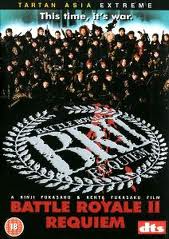 I love "Battle Royale." You should too. It's a fantastic blend of grindhouse violence, thoughtful commentary, and stunning execution on all ends. The cheese of the film never feels cheesy. The extreme violence never feels extreme and almost artful at times. The performances might be hit or miss, but the film is so invigorating that I rarely noticed. "Battle Royale II" is none of these things. The film is very cheesy and over exaggerated. The violence is thoughtless and the tension of the deaths missing. The performances are all misses. Although I wouldn't claim the film to be quite as bad as others, it's very hard not to feel the heavy weight of disappointment on my shoulders when it comes to it.

After the events of "Battle Royale," the survivors who beat the odds have decided to fight against the adults and their skewed world by creating a terrorist organization "Wild Seven." In retaliation towards this retaliation, the Japanese adults decide to revise "Battle Royale" into "BRII," where a Japanese class is taken, given weapons, and told to go kill the Wild Seven. Will the class succeed or decide enough is enough and join with the rebels?

Initially, I loved the concept of "Battle Royale II." The survivors of the first film create a terrorist organization and start blowing up shit. That sounds like a great action movie to jack up with violence. It could take the entire 'world gone to hell' concept a step further and allow it to inject more social/political commentary. Too bad "Battle Royale II" doesn't. Right from the get go it seems like this film was off the mark. The first half of the film, although entertaining in a B-movie sort of way, completely fails to embrace the initial premise. It's quickly brushed over to kick us to the 'teacher explains stuff' sequence where we are giving a pretty outrageous run down of the new game. The acting is terrible, complete with one of the most over-acted characters (our pill chewing teacher) that I have ever seen, the story makes no fucking sense whatsoever as they decide to use kids to front an assault on an island where the terrorists are holed up, and the style of the film is less about tension and art and more about ripping off modern war films. We care nothing for any of the kids involved as they are literately killed by the dozens in a war like sequence to start off the film. There might be more action here to be had for entertainment, but its modern shaky cam style certainly didn't come off as realistic as they seemed to want it. Then, of course, the film makes so little sense that it's laughable half the time...and believe it or not, this first half is the better half.

At the mid way point, the film comes to a screeching halt in momentum. Even if the first half didn't make sense and we didn't care about the characters, it was at least action packed and silly. At the half way point the film careens off the ledge and bombards the viewer with useless flashbacks (that would have been nice earlier so we would have cared about what was happening at all) and a droll of pseudo-social commentary that seemingly drags on and on and on. By the time the finale shows up, with perhaps the weirdest change of character motivation for the teacher I have ever seen on film, I was not only disappointed with the direction the film went, but I was bored too.

To be honest, I have seen much worse out of sequels than "Battle Royale II." The problem is that the first film was so good that when it went downhill, it had a long way to go and this film rolls ass-over-teapot on the way down. It's silly, over acted, under developed in writing, and worst of all - inconsistent in pacing. At times it was delightfully bad though and great for a few unintentional laughs, but it definitely missed the mark as a sequel. It's no wonder this film was tacked on as basically an extra 'goodie' in the collector's box for the first film. It's not worth the purchase on its own.