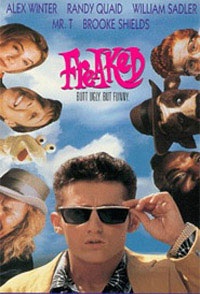 "Twelve milkmen IS theoretically possible. Thirteen is silly. Looks like there's one milkman too many, Coogan!"-- Ortiz The Dog Boy

After a brief, but quite successful, run with their sketch comedy show "The Idiot Box" on MTV, Alex Winter and Tom Stern solidified a deal for a film with Fox. What came from this deal is the surrealistic Monty Python-esque horror comedy "Freaked." What didn't come with the deal for this film was success. After some hum drum issues over at Fox, the film was essentially left for dead with limited promotion and even less of a push to mainstream America. Thusly, it took me this long to be able to see the damn thing. The wait was worth it though. "Freaked" has to be one of the funniest films from that era that I have ever seen. It's gloriously over the top with slap stick humor, it's silly beyond belief with the plot, and it is never afraid to do some of the most random things you have ever seen. All in all, its a film that you either get or you don't.

Ricky Coogin (Winter) is one of Hollywood's biggest actors. He's a little simple, but with the help of some greedy contracts he finds himself heading to South America to sponsor a questionable chemical product.While there, his best friend (Stoyanov) and a protester (Ward) stumble across an off the beaten path 'Freek Show' run by an eclectic and dastardly showman (Quaid). There this humble freak show owner turns people into these monsters and keeps them there for entertainment and our three heroes are caught in the mix...

When I made mention that "Freaked" is a film you either get or you don't, I damn well mean it. This is the kind of comedy that truly divides its viewers and it will divide them to significant lengths. Either the ridiculous Zucker/Python style visual slapstick and odd jokes will make you feel offended or it will have you on the floor laughing. I happen to fall into that latter category. I thought "Freaked" was way too funny to be the cult of cult films that it is. The jokes come rapid fire and Winter and company are relentless in the physical and off the cuff humor...all done with that early 90s MTV style spin.

This movie is weird too. The plot is absolute nonsense and beyond its initial "bad, sleazy corporations" moment, "Freaked" doesn't seem to have any kind true underlying meaning or lesson to be learned from its over the top antics. Even the usual, "don't judge people by their looks" seems to be kicked to curb in the focus of delivering some of the most ridiculous sequences I have ever seen. Have you ever wanted to see two walking 4-feet-tall eyes wielding machine guns and smoking joints? How about a circus full of freaks all dressed as milk men engaged in a knife fight? Well, whether you want to or not, "Freaked" delivers those kinds of moments...and, whether you find it funny or not, the film is unforgettable in them.

It helps that the entire cast and crew seems dedicated to making it as off beat as possible. The fact that Alex Winter had to sell his character while wearing half of a goblin costume the entire movie (and rarely being able to speak because of the mouth piece) is the kind of dedication this entire film has. The make up effects (and some amazing costumes/stop motion) make for a film Rob Zombie's art would have be jealous to accomplish. Yet, its Randy Quaid's off the kilter villain that steals every scene in the film. He's a master comedian at the odd supporting character (everyone remembers him from the "Vacation" films) and this is him at some of his best.

"Freaked" might be quite light on the horror and sometimes feels almost too uncontrolled for its own focus, but dammit, I had a blast watching it. It's awkward in all the greatest ways playing up physical and off the wall humor to its maximum potential. It is most certainly not a film for everyone, but here at Blood Brothers...we give it only the highest recommendation.

Unfortunately this film is out of print at this time. Here are two links to a few used copies on Amazon in case you are in dire need to see this film (including a link for the VHS release)...the links may not work for very long though.