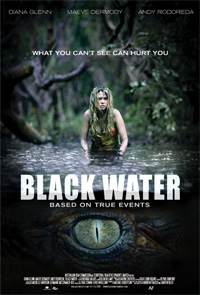 After watching the horrendous and mind numbing "Lake Placid 2", I had to find a better killer croc film for my "Croc Of Shit: Killer Croc/Gator Marathon" to redeem the genre. So I went to the friendly folks over at the I Love Horror Movies facebook group and asked them what I should watch. That's how "Black Water" ended up in this series and boy am I glad it did. Not only did this little low budget killer croc film redeem the genre, but it's the best film I've seen yet for it. Sorry "Rogue", but it looks like you were just replaced.

Lee (Dermody), her older sister Grace (Glenn), and her sister's husband (Rodoreda) seem to have it all planned out. A road trip around Australia seeing the sites and doing generally fun road trip things. You know, like a little fishing trip down a river by a little touring company. It sounded like fun. Fun until their boat is flipped by something under the water. Something that has made their guide disappear. Now the three of them are stuck fighting for their lives against the nature they were there to see.

Simplicity. A term that Hollywood seems intent on destroying. Needlessly complicated plots, overzealous amounts of characters, dizzying spectacle. It's all fluff in the end. Not that its always bad, but films like "Black Water" sure do make you appreciate that saying 'less is more.' That's what this little man vs nature flick has going for it. It's a small cast whom you decidedly feel for and care about when it comes to peril and the settings amount to...one after the initial set up. Seriously. I know it might sound boring that an hour of film is dedicated to three people hanging out in a tree and wading in water by an overturned boat, but directors Traucki and Nerlich cake on the tension and atmosphere to make it work.

...and work it does. "Black Water" had me on the edge of my seat for the last two-thirds of the film. The realism of the acting (with particular nods to Dermody who owns the film and had to) is matched by the realism of the execution to make this film feel real. The lack of CGI kept it grounded and the fact that we don't even see the damn crocodile until like 40 minutes into the film (and barely until the finale) makes it even scarier. Death lurking under the water where you don't know where it is? Yeah, that's scary.

"Black Water" is a simple film and it is simply awesome. The directors keep it grounded and tension packed, the acting is top notch, and the limited budget is used for maximum effect for realism. Although I'm sure some of the less attentive movie watchers might be bored with the film for its lack of 'spectacle', I found the change of pace refreshing and inspired. This film gets a blood spattered recommendation as the best killer croc film I've seen yet.