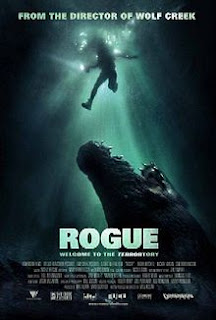 You can't always judge a film by whether or not it was a box office success. In the case of the Australian man vs croc film "Rogue"...it's definitely the case. For my second film in my "Croc Of Sh!t: Killer Croc/Gator Marathon," I went down under to visit "Rogue" for the first time. Coming from the director of the brilliant "Wolf Creek", I had mixed expectations. I mean, what killer croc film is truly good? As it would turn out, "Rogue" is probably the best killer croc film I've seen yet and it comes off as a rather fun, vicious, and surprisingly tense ride through the rivers of the Outback.

The last thing travel journalist Pete (Vartan) really wants is some silly riverboat trip into the Outback to see some crocodiles. Yet there he was with a boat full of tourists and families being lead by the charming guide Kate (Mitchell). When a distress flare is fired off of the path, its up to the boat to go investigate the problem...but the horrors are not what they find. It's what finds them.

What surprised me the most about "Rogue" was that it took itself very seriously. Not only that, but it was done seriously enough that it worked. Director/writer McLean has an obvious talent for taking rather well worn genres and injecting this with a dark streak and seriousness that lifts them almost to artistic levels. Who thought he could do it with a killer croc movie? Not I, said the cautious reviewer.

By taking itself more seriously, not being an obvious piece of trash or the goofy elements of "Lake Placid", it allows McLean and company to really build some great tension and atmosphere. As silly as it would seem on paper, watching a group of stranded people on a tiny island in the middle of a river trying to outsmart a crocodile was a rather riveting experience. He keeps it paced tightly and uses some basic elements like darkness and character tension to some impressive effects. The acting might have been a bit hit or miss (Vartan tends to be overshadowed by Mitchell and some of his supporting cast...including a brief buy fun role for a young Sam Worthington), but with the talented McLean behind the camera, the chemistry worked for the best.

Of course though, this film wouldn't even be here in the reviewing queue if it wasn't for the villain of the film: a big fucking crocodile. Although the film obviously didn't have the budget for some big croc moments, "Rogue" does manage to instigate enough terror with only dark shadowy glimpses of the carnivorous beast for the first two-thirds of the film. The finale does take it up a notch by having a bigger more intense standoff between our hero and the croc in its den where, believe it or not, the CGI actually looks pretty damn good. It was impressive enough not to ever take me out of the moment (perhaps more is due to McLean's pacing and thoughtful lighting to help the situation) and it creates for a memorable finale that kicks the film into horror territory.

Obviously, "Rogue" is not perfect. It's often quite predictable and many of the smaller characters seem to be fodder for the slaughter rather than memorable bits. A few scenes seemed to be irrationally written (including the rope climbing debacle over the river is almost funny in how ridiculous it gets), but overall the film has a one-two punch of taunt tension and pretty impressive croc scares that kicks it to being the best killer croc film I've seen yet.