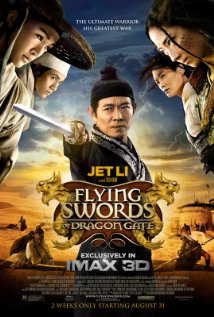 It would seem that Tsui Hark wasn't quite done with the "Dragon Gate" story in his produced remake from 1992, "New Dragon Gate Inn." So he decided to make a second remake (!) and one where he would also serve as a director rather than just a producer and writer like the last one. Honestly I've never seen either of the original films ("Dragon Gate Inn" from 1966 and the above mentioned 90s remake) so comparisons to those will not be a prevalent feature of this review, but I can say that I felt that "Flying Swords Of Dragon Gate" was a pretty big missed opportunity. The film feels oddly unfocused with far too many characters and random plot twists. Despite some fun high flying wire fights, Hark also tends to rely on CGI far too much. It just creates a rather awkward martial arts film that might please on a surface level, but rarely hits the dramatic tones it desperately strives for.

As China remains in a state of split attitudes, the Emperors eunuchs have gained too much power and influence and police the nation with vicious ways. This leads a group of rogue assassins under the guidance of Zhou (Jet Li) to start taking matters into their own hands. When the West Bureau head Yu Huatian (Chen Kun) gets caught in the path of Zhou while hunting down a pregnant concubine who holds one of the Emperor's children, the two will gather their own powerful allies for a massive showdown at the legendary Dragon Gate Inn...

There is a lot going on in this film. Illegitimate love children, political assassination, treasure hunts for a lost city filled with gold, and a slew of characters all with pasts connected to one another. Oh and a double identity twist where one of the good guys looks just like the lead villain. It's simply far too much for one film. Half of the time I felt like I was watching a sequel where character interactions stemmed from some sort of previous story that I missed (including a significant back story between Li and another wandering assassin who seemed to share a romantic past?) and it left me feeling like there were significant chunks of the script missing. It derails the narrative and makes the entire storytelling process feel muddy and unfocused. "Flying Swords" tries to embrace it's epic nature far too much and leaves us feeling like an audience watching rather than engrossed in the film.

Tsui Hark just has trouble with the general focus of "Flying Swords Of Dragon Gate." Not only is the script jumpy and too big, but his direction tends to think too much inside of said "epic box" too. He tries to weave all of these different style stories into one big ball. The first third of the film worked for me as we follow Jet Li in his killing spree of political intrigue. It kicks off with an awesome (and over the top) assassination sequence, but after that it tends to just lose the story and drive overall. I loved the casting of the film, but too many characters are left underdeveloped as it focuses on plots and plot crossovers. I loved the wire work too, but it cascades into a CGI visual escapade climaxing in a mid tornado sword fight that simply failed to inspire. Hark has already been using far too much CGI lately, but this is ridiculous here. It's as if Hark and company wanted to make a Hollywood style film out of a Hong Kong flick and the resulting combination fails to reach the height of either.

"Flying Swords" can be fun with some of its smaller supporting cast and there is plenty of great fighting to be had, but the film itself struggles to find a footing to root itself in to deliver the epic picture it could have been. As a long time Hark and Li fan, the duo has a miss on there hand with "Flying Swords." It's a fun and entertaining martial arts film, but it rarely rises above that.