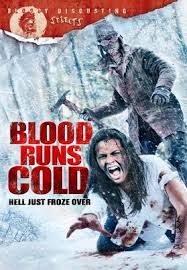 It was always a complaint of mine that not enough horror films take place during winter, particularly slasher films. It's a great 'gimmick' and it is not used enough. Somebody must be hearing my prayers because here comes "Blood Runs Cold" a smashing low budget slasher that homages the late 70s/early 80s style and does it with enough creative flair and tension to sell its often under scripted premise. Throwing back to the early style of Sam Raimi "Blood Runs Cold" is far from original, but the suffocating tension and intense slasher brutality is enough to cater to any old school horror fan.

Winona (Oldenburg) simply needs a break. She has become a successful artist in her own right, but she needs to dig back to her roots. Her manager rents an old house on the outskirts of the town she grew up in for her to escape and it seems like it might be the breather she needs. Even when she runs into an old boyfriend, everything seems to be going smoothly and when she invites him and his two friends over it seems like a great time. Until people start to disappear into the winter. Until Winona begins to wonder if the house was ever empty to begin with...

So it's a slasher film and its pretty obvious that the script isn't going to pull many punches with its simplicity, but it's that same simplicity that allows writer/director Sonny Laguna to do some unique things. The dialogue is very basic and very limited throughout the film and I've read a few reviews that seem to think this is a bad thing. Occasionally, there feels like moments drag on a bit too long but I was more aware of the tension of the isolation of the setting that it creates. Nothing is more sinister than silence and Laguna uses that quite a bit here. The camera work is delightfully thoughtful with lots of angles and odd shots (think Raimi mixed with a little bit of early 80s Italian giallo at times) and Laguna slathers on the atmosphere using the house and the villain to maximum effect for its budget.

Oh yes, the budget does hinder the film at times. Although it creates an early 80s style to the film, the acting is, overall, pretty bad and the actors are definitely not quite fully comfortable in the English language (I guess they were really gunning for that American slasher feel). The special effects are remarkably well done considering the budget and in true slasher form, the film guns for a couple of great gory moments that seem fitting for this film and the intensity it has at times. I was definitely surprised at how they accomplished some great effects with editing (including a thrown ax that hits a pole next to one of our heroes) and despite the flaws I was definitely digging the potential talent buried in the film.

"Blood Runs Cold" is not original, nor is it going to be impress those critics out there who nit pick every little detail until the big picture is lost. The acting is bad, the budget hurts the film for sure, and it's a very simple plot for us to digest. Dammit, it's a slasher though. It's got gore, clever kills (who saw the machine gun coming? Not me.), and a very creepy villain with snow caked goggles and a weird hat that comes off a pretty memorable for how limited we were on details about him...which was more fun for the few subtle details we got at the end. It works in an homage sort of way. "Blood Runs Cold" is buried in thick atmosphere and killer slasher moments that showcase the potential for the people involved...specifically Laguna as a director. Slasher fans definitely need to take a stab with "Blood Runs Cold."

Written By Matt Reifschneider
Posted by DarkReif at 6:21 PM