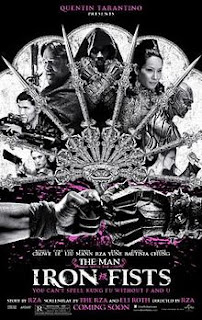 I should have known better. I really should have. "The Man With The Iron Fists" was simply too good to be true. Quentin Tarantino lends his name as a presenter, it's co-written by long time kung fu advocate RZA and horror guru Eli Roth, it has a cast of great memorable B-grade stars (and a few A-grade), and its story is obviously riffed off of one of my favorite silly Shaw Brothers vehicles "The Kid With The Golden Arm." I mean, this spelled awesome...or it should have. As it turns out, RZA's homage to classic kung fu comes off as an awkward modernization of the style rather than a true homage. It flounders on trying to do too much and, unfortunately, RZA's skills as a writer/director/actor are not enough to carry the film above some of it's charming qualities. It ends up being a rather head-scratcher instead.

The Blacksmith (RZA) has been making his living in Jungle Village by supplying weapons to most of the vicious gangs around, but he dreams for a life away from it all with the woman of his dreams Lady Silk (Chung). The problem arises that there was an upheaval in the Lion Clan and a corrupt son Silver Lion (Mann) and his brother Bronze Lion (Le) and the two plan to steal a shipment of gold that is being delivered through the village. Now its up to The Blacksmith with the help of a ex-Lion Clan member (Yune) and a drunken British knife fighter named Jack (Crowe) to stop them before they tear the town to pieces.

If you are a martial arts fan, the above synopsis should sound fucking awesome. That's because, deep down in the core of the film, there is something very cool about "The Man With The Iron Fists." It has revenge, clans based on animals, conniving prostitutes, Shaolin monks, a drunken Russell Crowe, enough wire work kung fu to shake a stick at, and a fucking villain who can turn his skin into brass. Yeah, fucking brass. This movie has so many great elements to it that it quite literally should have been the American film to reignite the martial arts craze in the mainstream! And in concept, I love this movie. I really do.

Too bad the concept just didn't pan out. There can be a lot said about this film and why it fails to reach the levels it should have. In essence, one can dwindle down it's problems into two categories: the writing and the directorial choices. I have no issue with RZA. The man knows kung fu. He simply had trouble translating his love and knowledge onto film. The script is simply too big for its own britches and comes off as too complicated with too many characters. The film has to rush through way too many things, including why our lost Lion son X-Blade is where he is or The Blacksmith's slavery beginnings, and it drags out the film as it pummels you with an endless array of scripting fluff. Perhaps Eli Roth wasn't the best co-writer either as the film tends to be a little...soft...when it comes to dialogue and thoughtful character interactions.

Then of course, we come to the second issue of "The Man With The Iron Fists"...the artistic choices by RZA. Far be it from me to criticize him going modern with this film, but...well it didn't work. Too often the film comes off as an awkward bastard love child of Shaw Brothers love and catering to American audiences' love of crappy editing to create intensity. It helps that the fighting is rather impressively choreographed by legendary Corey Yuen. It doesn't help that it was edited so poorly. Then again, rumor has it that RZA's cut of the film was four hours long and had to be edited down to an hour and half version for theatrical release...something RZA strongly disagreed with. It's obvious watching the movie too.

Perhaps that 'uncut' film will eventually see the light of day. Perhaps "The Man With The Iron Fists" will find its cult audience in ten years and survive in that way. Either way, as of right now, this long time martial arts fan is not impressed. "The Man With The Iron Fists" was too epic, too clunky, and too silly to truly inspire the frenzy I so hoped it would create. All in all, its mostly for die hard fans...even if they might find themselves disappointed.