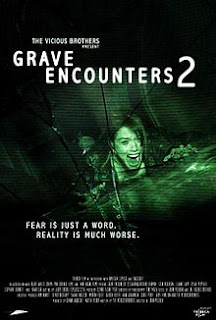 As if the horror genre needed more generic found footage films, "Grave Encounters 2" decided to rear its ugly head. Now before I get into my review for this sequel I will state that despite being rather by the numbers, I actually found things to enjoy about the first "Grave Encounters." Don't believe me? Click the hyperlink in the title of the first film. There were elements that I quite enjoyed about it. Thusly, I went into "Grave Encounters 2" with a relative cautious optimism that there might be something...just something...that I might take away from it. If there is anything that would kill optimism in the found footage horror genre, its generic and rehashed sequels like this.

Alex Wright (Harmon) is a film student desperate to make his tour de force horror flick. He's a particular horror fan himself and when he starts receiving mysterious emails and messages from someone named 'deathawaits' on his review for the first "Grave Encounters" film, he decides to investigate. As it turns out, the first "Grave Encounters" wasn't a movie at all...it was all real. With the location of the real mental hospital that the first film was shot at in hand, he is going to take a small crew and film his true horror classic...

I try to not use the term 'knock off' too often as many audiences can mix up 'homage' and 'knock off' too quickly. I have no qualm with calling "Grave Encounters 2" a complete and utter knock off film riding on the coattails of its predecessor and far superior found footage horror films. None at all. In fact, it was so blatantly pulling scenes and ideas from other horror films that, with a few drinks, it might have been damn close to a fun trivia game called "What's This Scene Stolen From?"

When the first act of this found footage film rips on "Blair Witch 2," you already know you are in trouble. Not that the idea is bad. The meta-concept of having the first film in a franchise turn out to be 'real' footage was fun in "Blair Witch 2" but it just was horribly executed. With "Grave Encounters 2" it's just as horribly executed and, quite frankly, very boring. Then the film cascades into the haunted asylum where it follows the same footsteps of its predecessor and steals scenes from "[Rec]", "Blair Witch", and even "Paranormal Activity" at one point. By the time anything original happens in the third act (where it does take a neat twist that creates a connection to the first film...even if its a very large stretch even in the context of the series), I was so disinterested by the lacking cohesive narrative and characters that I was almost angry.

There was a moment or two in "Grave Encounters 2" that gave me some false hope, but the overall product is such a mess of stolen ideas and half thought executions that its not even really worth it for horror fans. You've seen this film a multitude of times before and every single one of them has been better (expect for maybe "Paranormal Entity"...that shit was awful). My recommendation is to skip this one and go for something even slightly better.

So if you are truly a glutton for punishment, feel free to order your copy from the links below for its official March 12th, 2013 release.