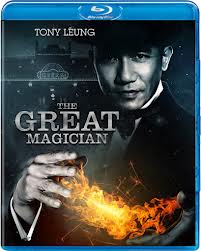 Well Go USA has brought out some pretty unique material to US soils since the beginning, so when "The Great Magician" arrived on my doorstep I knew it was going to be something of a spectacle to watch. And this Chinese comedy/action/drama/fantasy does just that. Although I had my issues with some of the executions throughout, "The Great Magician" proves to be a massively fun and entertaining watch that piles on the excitement and humor with flair and impressive performances. It's not a perfect film, but damn if it's not entertaining.

In 1920s Beijing, a group of warlords lead by the mysterious and charming Bully Lei (Lau Ching-wan) have been battling out since the fall of the Qing Dynasty. To even the score, Bully Lei begins to use local magicians to lure people into his army and to also swoon his seventh wife (Zhou Xun) into falling in love with him. When a unknown and very powerful magician (Tony Leung) with a massive troupe appears, Bully Lei decides he is the perfect co-hort to acheive his goals...no matter what the magician's true intentions might be...

Director Derek Yee was a great choice for this film. Right away, it's as if he understood just how this film should play out. He slathers the film in this almost fantasy like atmosphere and jacks up the mysteriousness of the film. Like a magician himself, he really let's the the surface level of the plot and characters to cover up the twists and true intentions. "The Great Magician" plays out like a giant mystery film that keeps the audience completely glued to the screen as depths to our lead characters and strong chemistry is plaid out in front of our eyes. The actors involved take this to the next level too with the stunning cast that is assembled here. Although sometimes the jokes/humor can play a little flat (other times its hilarious!), the cast here own their respective roles and really add to the entire feeling of the film with some stunning performances.

Unfortunately, just like a real magic show, once the mysteriousness has lifted...a lot of the fun seems to be lost in the shuffle. Most of the issues that arise with "The Great Magician" stem from its awkward narrative that seemingly leaps around from character to character at first with little regard to the audience's ability to follow. At times, a perfectly solid narrative is skewed to the point that my confusion about what exactly was happening pulled me out of the film. The red herrings and various little things that are thrown at the audience are meant to create that mystery, but it also occasionally frustrated me as I desperately wanted answers earlier then they occurred.

"The Great Magician" a wonderfully fun film that was able to ride on the talents of its cast and director despite some issues in its script and how the narrative flows with all of the intent on creating that magic and mystery. I was also a little disappointed with how the film ended on a rather "real" fantasy moment, but I'm guessing that had more to do with the book that the film was based on then what actually fit the film. Nonetheless, "The Great Magician" ended up being quite the entertaining flick that had wonderfully shot magic set pieces and great chemistry to make it all work. Perhaps not a perfect film, it had the ace up its sleeve as a great film to just enjoy for its mystery and magic.

Ordering "The Great Magician" isn't all smoke and mirrors though. Just click the links below to score your copy for it's March 19th, 2013 release via Amazon and our dear friends at Well Go USA.