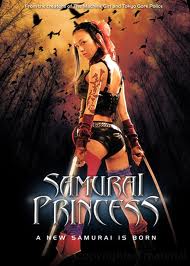 There is something to be said about 'splatter' films and, in particular, the Japanese side of them. They take a specific taste in cult film to enjoy as they truly embrace the ridiculousness of their plots and the extensiveness of their gore. In the case of "Samurai Princess," writer and director Kengo Kaji (known for writing "Tokyo Gore Police") goes for an even weirder, if not similarly themed, film. Even for a splatter film, "Samurai Princess" seems a bit weak overall with its nonsensical plot and often over emphasized sexual overtones.

In another version of history, Japan is still in a feudal like state with villages and anarchist like rule. There are cyborg like warriors that wander the land driven insane by their inability to cope with their torn existence. When a group of 12 young girls are raped and slaughtered, a mad scientist with the help of a spiritual woman creates a samurai princess from the body of one of the slain and puts the souls of her fallen sisters inside of her. Armed with a plethora of weaponry, she teams up with a guitar wielding nomadic solider and seeks revenge for the atrocity she endured.

I'm not saying that splatter films are meant to be 'good' by any classical sense of the word. Troma certainly made a career out of producing low budget B-grade horror and exploitation films with this ideology...and they succeed at what they intend. It's just a different kind of art form. Even within that concept though, I felt like "Samurai Princess" struggled to find its footing. It has all the elements to make a splatter film...grotesque special effects with plenty of severed body parts, ridiculous concepts including boob grenades and mystery sword wielding 'soul arms', and a solid dose of silliness to ice it over with, but it has a bit of trouble getting it all to work together.

At times the film can be delightfully cheesy and out there. When the film decided to cake on the more outrageous moments, including a wandering warrior with the ability to kill a men with a guitar solo, it's hilariously fun. The acting is horrible (I suggest watching the dubbed version just because it adds a bit more to the outrageous-ness of the film) and half of the time the plot was so nonsensical that only someone on crack could piece it together to make a cohesive narrative, but it has it's moments...moments where you forget about its issues and realize just how fun it is. Seeing a person get shot and pinned to the wall with a rocket chainsaw leg, for example. Those moments are rare and sometimes are overshadowed by some of the low budget constraints of the film, but they are there and I'm sure splatter film fans will find something to love.

It's hard enough to rate cult films, but its even harder to rate splatter films like "Samurai Princess." Does it achieve it's intent by making a super gory over the top low budget action/horror flick? Sure it does, but the execution even in that idea is wobbly at best. Too often I wasn't sure if the film knew it was supposed to be silly (our two warrior detectives out to kill cyborgs) or be taken serious (the guitar players backstory and the weird romantic subplot) and the result is rather mixed. Only for splatter fans, if I were to recommend it.