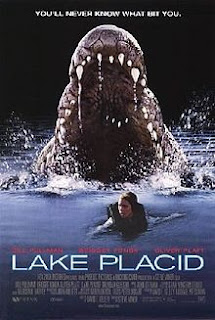 For the first film in my "Croc Of Sh!t: Killer Croc/Gator Film Marathon", I had to go back and revisit the film that really brought this sub-genre into the modern age, "Lake Placid." Although the film has significant talent behind it with a great cast, Steve Miner in the director's chair, and the witty writing of David E. Kelly, really the film is nothing more than a big budget B-film. To a film fan like myself, it probably works for the better that way as the film embraces some of the ridiculousness of its plot to make things exciting and fun. It's not really a great film by any means, but it knows how to entertain and it does that well.

The area around Black Lake has been a peaceful area for quite some time. Only a handful of houses exist on the lake front and nature is left there to be itself. When a fish and game officer is torn in half while studying beavers right in front of the local sheriff (Gleeson), a massive investigation ensues. Another fish and game officer (Pullman) is sent to help along with a paleontologist (Fonda) who needs to look at a tooth found at the crime scene. When an eclectic croc hunter (Platt) also shows, the group begins to think that a very large crocodile has found it's way to Maine...and the only natural predator there to stop it may not survive long enough to tell anyone.

"Lake Placid" is an odd hybrid of styles. It's quite obviously an 'adventure' film from how Miner presents the plot, but the film itself is littered with horror elements and slathered in Kelly's quirky character and fast paced comedic wit. In a way, it very much comes off as a fun film that is never meant to be taken seriously and caters to an audience willing to just run with the idea...which in itself is pretty ridiculous.  The humor did really work though and the film is populated with enough great off beat neurotic characters that it was almost more fun to watch them bicker than to watch the crocodile try to kill them.

The plot itself follows a pretty basic premise and the thrills tend to be rather mundane despite the ridiculousness of the situations. It's only horror in some of the loosest senses. "Lake Placid" is more action oriented than anything. How else would you justify seeing a bear/croc fight or to see a 30 foot croc try to rip a helicopter out of the air? By making it an adventure film, that's how. And the blend essentially works as it runs through all of the motions to get us to the ending with as little deep effort as possible.

There are a few things that bugged me about "Lake Placid." The rather by the numbers approach lead it to be very predictable and the film definitely leaves a lot to be assumed for the audience to make sense of it both in characters and plot. Even the few twists that it throws out to make the film interesting are out of the blue - including a very laughable one at the end that comes off the wrong way. It's far from original in any way and it can come off as a bit forced in many of its 'thrills.' Horror fans may not find a lot here to be impressed by outside of the quirk and solid special effects.

Nonetheless, "Lake Placid" is still a fun and quirky film that really does entertain more than impress on many of its levels. The special effects are stellar (the CGI is a bit dated now, but Stan Winston's work is still amazing) and the ridiculousness of some moments is worth the watch. I mean, seriously you get to see a giant croc take out a bear! So go into with a grain of salt, enjoy it for the big budget B movie it is and you'll leave with a smile on your face.