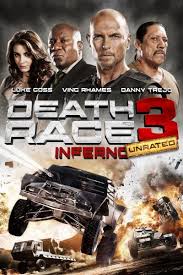 Although the remake of "Death Race" was one of Paul WS Anderson's better films, it was a rather surprising event that they would make a prequel to it with "Death Race 2." Even more surprising is how they managed to fit a third movie, the focus of this review, as a sequel to "Death Race 2" but still a prequel to the first film. Besides the odd logical leap of how it was supposed to fit together, you should know exactly what you are getting into when you watch a film called "Death Race 3: Inferno." It's low budget action B-grade from start to finish. Although it's easily my least favorite of the three in the franchise, it's still a fun ride that manged to keep me interested throughout.

With the initial success of "Death Race" and the mysterious driver Frankenstein (Goss) only one race from winning his freedom, an odd corporate loop hole allows Niles York (Scott) to rip the franchise out for his own profit. There he changes the rules and demands that Frankenstein lose the race or there will be horrible consequences for him and his team (Trejo, Koehler, Phoenix). So York takes the gig world wide and both Frankenstein and 14K (Shou) are shipped out to South Africa for an all new Death Race...but will Frankenstein defy the system to win or does he have a whole new plan to cheat the system?

Let me be frank with you, I was not expecting much from "Death Race 3." When you have Paul WS Anderson as a co-writer on a film and not a director, you can pretty much expect it to be illogical and silly. "Death Race 3" is definitely illogical and silly. The entire film is played off like some sort of "spin-off" with a new villain and new location for our heroic team of racers to battle. The villain is heavily over acted by Dougray Scott (he always seems to do that) and the new settting is actually quite boring when it's not being silly. Like why does Goss have to stay in a jail cell that's mid calf full of water? Or why does the terrain drastically change throughout courses? These are normal issues of consistancy that simply come with this series so at least I was expecting it even if they make for an overly frustrating and questionable film going experience.

To be honest, there are really only two things that save this film from being a complete waste of time: Luke Goss and the races. Normally I would say 'the action', but there was one sequence where the women of Death Race have to fight each other that was so utterly stupid and poorly filmed that I can't quite claim all of the action was good. That leaves the racing portions. Perhaps it's just my eternal love for the video game franchise "Twisted Metal" and the car combat it had that makes these moments as much fun as they are, but they are definitely the highlight of the film. It also helps that Goss returns to the fold as our hero Frankenstein and even without the help of any kind of character growth or, you know, plot to help him - he still comes off as quite charming and gives us somebody to root for. He has a screen presence that benefits any film or show he's on and he is easily one of the best reasons to even keep up with this franchise.

"Death Race 3" is not a good film. If not for some fun car combat and Goss, I would say it's barely watchable beyond having a few good chuckles. The plot is silly (with a 'twist' ending that seems completely and utterly forced), the supporting cast wasted, and the new setting rarely adds anything new to the gimmick that makes it worth the watch. This is a film only for fans of the series or for those looking for a laughable B-grade action flick...which has its place.