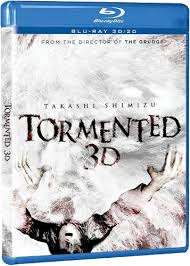 Takashi Shimizu certainly set the standard high for his career. When you reach early critical (and worldwide nonetheless) success with a film like "Ju-On", which essentially changed the landscape of how to do ghost horror films when it was released, then you have a lot to live up to. It's been a rocky road for him since then as people clamor for quality on par of "Ju-On", but something different. His last film before "Tormented", the intriguing "Shock Labyrinth" seemed to see Shimizu heading back in the right direction. "Tormented", a film that follows in the same paths of "Shock Labyrinth," is easily Shimizu's best since the epic "Ju-On" even if it might divide its viewers a bit.

Kiriko (Mitsushima) lost her voice when she was younger so it's made helping her younger half brother Daigo (Shibuya) tougher than it should be. After the death of Daigo's mother, their father (Kagawa) has become a recluse, sheltering himself in crafting pop-up books. When Daigo starts having nightmares about stuffed rabbit doll, both handheld and as a person in a suit, Kiriko begins to worry. There's something else to the nightmares...they seem too real. Too familiar.

As with all of Shimizu films, "Tormented" focuses on creating artistic visceral imagery and suffocating atmosphere rather than focusing on...say, a coherent plot. While the plot for "Tormented" is definitely more decipherable than in some of his other films, it definitely takes a back seat to the emotions and painted pictures that he sets out to create for the audience. Luckily, this has been a trend for his films and I knew this going into "Tormented" so the lacking narrative flow didn't bother me as much as it did other viewers. It is still a bit of hindrance to the overall storytelling of the film, but when the atmosphere is in full effect...the film is a disturbing and thoughtful character study.

As creepy as our bunny 'villain' is to the film, it doesn't take long to realize that this isn't a simple film about good vs. evil. It's much more of a character focused tale that is not meant to trick us or all out scare us. It has plenty of creepy moments (when the person in the bunny suit first appears, it's a pretty intense jump scare) to cater to those horror fans out there pleading for another "Ju-On", but the film has far more dramatic tension the deeper character work. Unlike "Shock Labyrinth", which has an appearance in this film during a theater scene and some shared settings/scares - almost as if this was some sort of sister film sharing the same themes like stuffed rabbits, spiral staircases, and abandoned hospitals, this film has a much better cast that carries it. Although the child actor of the film can be a bit hit or miss, the rest is made up for by some impressive performances from Mitsushima and Kagawa that carry the film and make it a bit more real than the blurred sense of dream and reality that Shimizu cakes on. This helps for many of the scares since we care about what is happening to this family.

Occasionally, the film seems to wander a bit too much into predictable territory and the narrative does get almost too vague towards the end. The latter issue is something that I felt Shimizu meant to do, to get the audience feeling like they don't know what's real anymore, but it ended up being almost frustrating at times instead of engulfing like it should have. "Tormented" tends to leave too much in the air without enough grounding to make it as impactful as it could have been.

All in all, I quite enjoyed "Tormented" as it was much deeper of a film then I expected. It's less about the horror and more about the mysterious journey of what happened to a torn apart family so keep that in mind when you go to watch it. The atmosphere is engrossing and when the film wants to scare you it does just that. Although I felt it could have been a bit more grounded and the narrative could have been tightened, "Tormented" was a much better journey into the realms of the supernatural than I expected...leaving me pleasantly surprised.

Fans of Shimizu or more thoughtful "ghost" films should definitely click below to pre-order their copy of "Tormented" for its April 2nd, 2013 release date from Well Go USA. Do it now. It's a great Easter present for the kiddies! Or something.