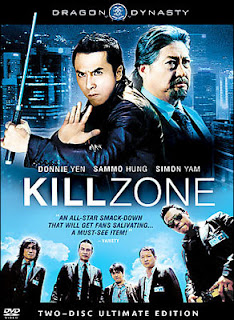 Take the classic martial arts sensibility of Sammo Hung, the modern intensity of Donnie Yen, and the dramatic swagger of Simon Yam, throw it all together in a crime drama with some pretty intense action pieces and you have a recipe for complete awesomeness. That's how "Kill Zone" works out in the end. Featuring a cast of all stars from all forms of great Chinese cinema and a solid (if not somewhat basic) story then "Kill Zone" becomes an effective piece of cop action/drama. One that is most definitely worth checking out for fans of the Asian persuasion.

Det. Chung (Yam) and his team of police officers have been after a notorious crime lord, Wong Po (Hung), for years. With only days to retire, Chung brings on board a replacement inspector to take over Wong Po's case, a highly admired man named Kwun (Yen). When an opportunity to finally nail Wong Po comes up with only a few details to be changed, Chung takes full advantage and tries to frame Wong Po. Unfortunately, Po and his cohorts (including a knife wielding assassin (Jing)) aren't pleased and take matters into their own hands. Now Chung, Kwun, and their men must decide whether or not vengeance is worth undermining justice for the greater good.

Although "Kill Zone" can be a little melodramatic at times, director Yip has a solid grip on how to balance the action sequences with the more heavy morally dramatic moments. Although the final act has some more than impressive fight sequences choreographed by Yen which highlight the film, its the build up to these moments that really make it pay off as well as it does. Despite the 'bad cop' motif of Yam's team, the actors and their characters strike enough empathy for the audience to really care and struggle with their troubles as they try to do good even if the actions can be seen as not. It's this dramatic side that makes the eventual collision between cop and villain (who is wonderfully played by Hung) worth following to the final moments.

Of course, with its outstanding cast, "Kill Zone" really embraces their talents to the fullest. Yip has a great knack for visual quirkiness that brings out their best. His pacing is something that could have been tightened a bit and occasionally he does some odd things (like what the hell is with the four way face shots of the cops when they are driving?), but he does an admirable job making what could have been a very boring first half move pretty quickly.

As I mentioned prior, the fight sequences are something to be admired too. The final act contains some seriously awesome modern martial arts displays that cap off a nice tense build. Seeing Donnie Yen take on a legend like Sammo Hung is a kung-fu dream come true that is only prefaced by a very cool bonus fight between Yen and Jing. These are worth the watch alone.