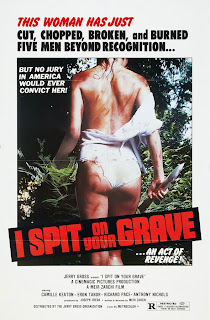 The 70's was the era of 'rape and revenge' exploitation horror and the film that kicked off this unpleasant subgenre was Wes Craven's notoriously brutal "The Last House on the Left." The monumental controversy behind that picture jump-started a whole slew of imitators trying to top the previous film in sheer nastiness. In Italy we had such pictures as "Night Train Murders", "House on the Edge of the Park" and "Hitch-Hike" but another home grown film right here in the United States holds a well deserved second rank of the "rape and revenge" subgenre. That medal goes to the notorious "I Spit on Your Grave."

"I Spit on Your Grave", man what a title! I remember seeing the giant Wizard Video box artwork at our local video store with a sticker on it that read "must be 18 to rent." "What kind of horror film is this?" I asked myself as I looked at the uneasy poster artwork of a woman, tattered and torn holding a knife. It wasn't the sticker or the box art that grabbed my attention the most.... it was the title. Surprisingly this now famous, attention grabbing title was not the original title the film was released under. "I Spit on Your Grave" was initially released in theaters with the less imaginative title "Day of the Woman" and in turn the film tanked. Distributors being smart in those days decided to re-title the film with the more sinister banner "I Spit on Your Grave", re-released it and wallah, instant hit! Under its re-Christianed title, "I Spit on Your Grave" garnered as much attention as its forefather "The Last House on the Left" and like it was quickly panned by critics with Roger Ebert calling it the "worst film he had ever seen." Is it that bad? Well let's pop in this cult classic and see.

Typical with rape and revenge grindhouse films we know the plot is going to be very simple, shocking and to the point. "I Spit on Your Grave" does deliver that. We are introduced to a young pretty author needing a little seclusion to concentrate on writing her new book so she rents a house in the country. While relaxing she tans in her bikini by a river and in turn attracts the attention of some young local rednecks. Her nimble body gets their hormones pumping and lacking ethics and morals they decide to rape her, again..... and again...... and again.

This is where the film becomes a pot of water that continues to grow hotter until it boils over. This film gives no chance for the audience to catch their breath! After the slow build-up the film takes off at a hundred miles an hour hitting the audience with everything it's got with its first sequence of brutality. After the rape our victim stumbles out into the forest, naked and delirious. Not long after our group of rednecks return to give her a second go around. By this time the film is becoming EXTREMELY unpleasant and the audience is just fidgeting in their seats. Being brutally raped twice she wanders home, even more delirious than before only to be greeted by our rapists yet again! "The Last House on the Left" had one brutal rape sequence but this film hits its audience with three! If your still able to view the film from this point and haven't been totally offended then this is where the film gets real interesting. Our writer doesn't go to the cops but instead decides to get cold calculating revenge by seducing each man one by one brutally killing them in extremely graphic ways (the bath tub sequence will be just one that will be forever burned in your mind). We'll just say the film lives up to its memorable tagline "This woman has just chopped, crippled and mutilated four men beyond recognition... but no jury in America would ever convict her!"

The film just pulls you in with its slow build of unpleasantness just to see how this poor woman gets vengeance. These goons are royally evil and deserve every horrible act they get! Even with its gripping sense of dread the film succumbs to many shortcomings due to novice filmmaking, even more so than the flaws present in "Last House." Director Meir Zarchi is an obvious novice and it shows with some poor camera-work. One shot of his that gets me is after our lead leaves a church the camera pans up to show the ceiling above the church door. Why did the director do this? It does not show any symbolism such as a cross so this sloppy shot is just one of many instances of clumsy filmmaking mistakes. Some sequences even come out unintentionally funny, like our rape victim chasing one of her attackers in a motorboat with an ax raised above her head. The scene just comes off looking a little silly.

Like many low budget films of this nature some of the acting is... ehhh... below average but our lead Camille Keaton is amazing in the role, perhaps a little too good as she makes the horrible rape sequences extremely realistic and unpleasant. Some of the characterizations are also a little head scratching like our mentally challenged character who, thanks to peer pressure, also rapes our victim. He shows displeasure in it and obvious remorse then later in the picture, out of nowhere, he becomes a complete lunatic and chases our lead with a knife. I mean what the fuck?! It would have been much more powerful the director kept this character remorsing his actions when our vengeful rape victim comes calling for revenge.

"I Spit on Your Grave" is an unpleasant, disturbing experience but none-the-less a powerful one. Who says powerful films have to be "happy and optimistic". Most of the time it's completely opposite, as with the case here and it's a shame that main stream critics don't get this and merely judge the film based on its unpleasant nature. "I Spit on Your Grave" is not for everyone and many will just find it depraved and unwatchable. If the film had a little tighter directing and overall better, perhaps more experienced filmmakers behind the camera would I have given this a higher rating but as is I still find this a must see for people who can handle powerful, disturbing motion pictures. The wave of influence this film had is still rippling today as a remake was recently made but that reviewing honor will be left up to my brother...