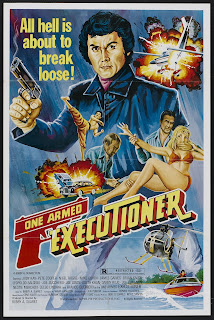 When it comes to Filipino films 'actionsploitation' is the name of the game and the king of this genre in the country is cult schlock maker Cirio H. Santiago. He maybe the king thanks to the sheer number of films he made but another director by the name of Bobby A. Suarez arguably made his action films with a little higher 'quality' without losing that lovable exploitation, grindhouse edge. A prime example of this director's work is "The One-Armed Executioner."

Well this 1983 actionsploitation film lives up to its name as it features a one armed man getting revenge. Can't get more basic and badass than that can you? I don't know but one-armed people out for vengeance always makes the character more badass. Look at the Shaw Brothers "One-Armed Swordsman" series for another example. One-armed guys kicking ass and taking names is just B-A-D-A-S-S.

Well here we get a Filipino INTERPOL agent who is hot on the trail of a drug lord. When he approaches the goon with false information about obtaining a diary detailing his criminal activities, the drug lord decides to have the INTERPOL agent's wife slaughtered and mangling the agent by cutting off his arm. BAD MOVE! Don't these bad guys ever learn.... always kill the dude! Leaving them alive only makes them go Charlie Bronson on your ass later. Well our agent goes into training, learning martial arts and gun handling with only one arm. When he's all trained up, he heads out for vengeance and lots of chases and explosions ensue.

The absolute cheesiest aspect of this film is the inability the crew has of hiding our leads cut-off arm. It's obviously strapped to his side or his stomach through a majority of the scenes but then again how does one truly hide an arm without the aid of modern CGI? This aspect just adds more fun to an already incredibly cheesy and fun action fest that surprisingly has well staged action sequences, especially a helicopter and boat chase towards the end of the film.

The One-Armed Executioner may not be classy art but it is low budget action entertainment goodness. The acting and overall film quality is typical grindhouse material of the time but fans of these obscure treasures will most definitely want to pick this film up. Dark Sky Films released a wonderful DVD of this lost 'classic' and paired it with another Bobby A. Suarez film entitled "Cleopatra Wong."