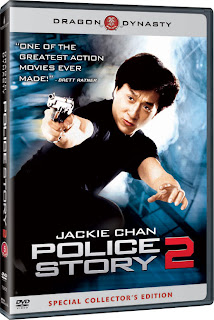 As with any sort of action film franchise, each additional entry has to be bigger and more boisterous than the previous. This also goes for "Police Story". The first film had a great balance of action, drama, and comedy to make it a fascinating watch and a great Jackie Chan film. "Police Story 2" however, just doesn't quite get the balance right. Oh yes, its bigger and badder than the original, but it just doesn't strike the same chemistry as its predecessor. It makes for a pretty solid watch, but it just slightly falters to the first.

Ka Kui (Chan) has been demoted for the massive destruction he caused in his rebellion at the end of "Police Story". When his old enemy shows up once more, he decides that he needs to leave the force for the sake of his relationship (and safety) of girlfriend May (Cheung). When a very profitable group has their properties held ransom by some all too serious and organized terrorist bombers, Ka Kui is brought out of retirement to solve the case...and perhaps kick a little more ass.

In "Police Story 2"'s attempts at being bigger and more awesome on every level, it seemingly forgets that what made the first so good was its foundation in its story. Although this film really makes for a larger story (with all sorts of twists and plot switches) it sort of loses focus on the characters and seems to meander a bit much. The comedic scenes seem to be randomly placed in the film, with a seriously out of place 'fart in an elevator sequence', and rarely blend with the more dramatic pieces as well. They can work, especially when Chan and Cheung do their bickering couple routine, but it mostly misses the mark. As do some of the more dramatic scenes with only one that really works its magic with the villains reading a letter to Ka Kui as he is captured. Other than that though, the dramatic tension seemingly loses steam too.

The one part that "Police Story 2" does improve on is its action sequences. And boy oh boy does it go all out. Bigger explosions, more broken glass, more Chan leaping over ridiculously high walls, more fist to cuffs, and even more impressive set work for stunts. You name it and this film pretty much has it. One of Jackie Chan's best attributes is finding cool set pieces for him to work his stunt magic and this one has memorable scene after memorable scene. The play ground brawl is one of his best choreographed fight sequences in his career. Those poor stunt guys!

Although "Police Story 2" just slightly misses to its first entry, its still an amazingly fun ride to take and highly worth the viewing. If only for its action pieces. Chan delivers once again in entertainment even if the substance is a bit off.

BONUS RANT: The film starts off with one of the poorest recaps ever done. Although Chan improves overall as a director on this one, this poorly constructed 'flashback' sequence of events from "Police Story" tells the audience NOTHING about the story. It's more or less a best of stunts sequence from the original. Like an oddly paced trailer with no voice over really.